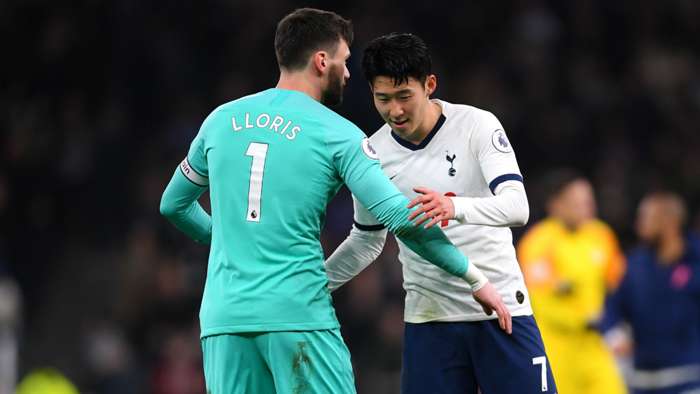 The on-fieldincidentbetweenHugo Llorisand Son Heung-min during Tottenham's win over Everton showedthe desire within the team to do better, according to Lucas Moura.

Captain Lloris and forward Son were involved in a disagreement as the players left the field at half-time in Monday's Premier League fixture, though theformer insisted after the game there was no problem between the pair.

Spurs boss Jose Mourinho described it as "beautiful" in his post-match interview following the 1-0 triumph, with Lucas insisting such occurrences are "completely normal" within most sides.

The Brazilian forward also believes the bust-up - Lloris revealed after the final whistle he had taken issue with his team-matefor failing to track back with Everton's Richarlison - is a positive sign as Tottenham aim to make a late charge to qualify for next season's Champions League.

"It's completely normalin a team," Lucastold Sky Sports when asked about the disagreement between his colleagues. "I think every team has this.

"We know that we can do better, we know our quality.

"When we get angry with each other on the pitch, it's to show that we can do better."

The narrow home victory over Everton lifted Spurs up to eighth in the table, though they still face an almighty task to climb into the top four with only five games remaining.

However,fifth place - currently occupied by Manchester United - could yet be enough to get Champions League football, depending on the verdict of Manchester City's hearing with theCourt of Arbitration for Sport.

"We still have five games to play and we still have the opportunity to qualify for the Champions League," Lucassaid ahead of Thursday's trip to relegation-threatened Bournemouth.

"We know it's very, very difficult, but it's not impossible. We know, in football, anything can happen.

"If we qualify for the Europa League, it's not our objective because we want Champions Leaguebut it is also a beautiful competition."

Tottenham are in action again on Thursday when they visit Bournemouth and then host Arsenal on Sunday.