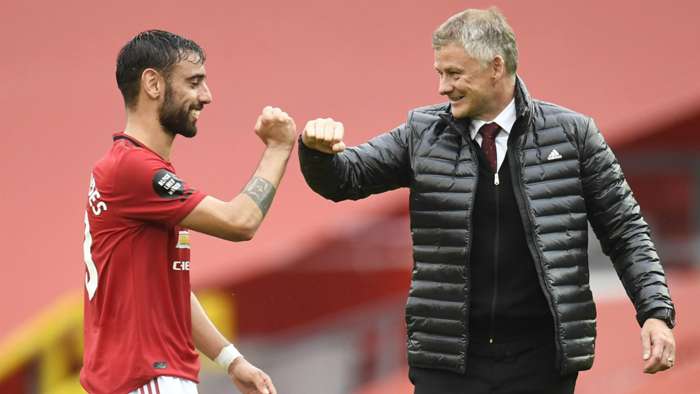 The Portuguese has proven an instant hit in Manchester, scoring nine goals and laying on eight assists in his first 18 appearances, making the transition from the Primeira Liga to the Premier League seamlessly.

Ighalo, meanwhile, has impressed in a back-up striker role for the Red Devils, scoring five goals in four starts while proving himself as a useful target man and extra option in the final third for Solskjaer.

United were dogged by inconsistency in the first half of the season, but their form since bringing in two new faces in the winter transfer window has been much improved, and a top-four finish is now on the cards.

Solskjaer has acknowledged the fact thatFernandes and Ighalohave had a huge impact, while also stressing the importance of Marcus Rashford and Paul Pogba's respective returns from long-term injury in his side's recent resurgence.

“I think we’ve grown over the whole season,”the United boss told reporters ahead of a midweek meeting with West Ham.

“The additions of Odion, Bruno and Paul coming back, plus Marcus coming back is a strength for us. We are better as a group and more robust and resilient.

“The proof is in the pudding and we’ll have to see on Wednesday how they perform.”

The Red Devils will be aiming to get back to winning ways when the Hammers arrive at Old Trafford on Wednesday, after crashing out of the FA Cup at the hands of Chelsea over the weekend.

Solskjaer's men were thoroughly outplayed during a3-1 defeat at Wembley, but the Norwegian is expecting a strong response in their latest Premier League outing.

“When you lose a game, you’re hurt and disappointed,“ he admitted. ”You’ve just got to focus on the next thing.