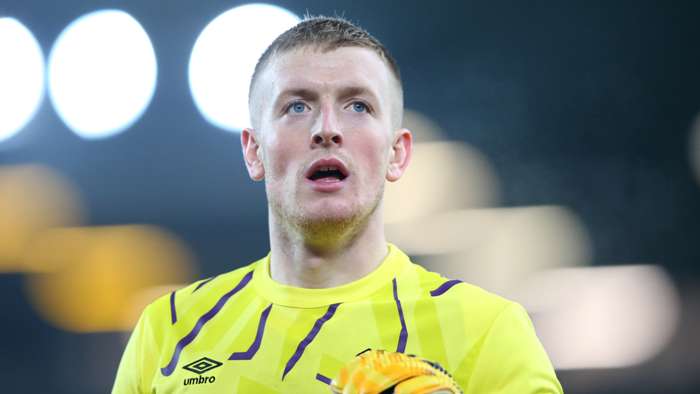 The Everton goalkeeper went off injured in the first half of the Premier League defeat to Burnley on Saturday.

The 27-year-old got hurt diving to stop a shot at Goodison Park and was sent for a scan on Monday.

The Toffees confirmed on Tuesday that Pickford will not be fit to feature for England when they take on San Marino on March 25, Albania three days later and Poland on March 31.

"Everton goalkeeper Jordan Pickford will miss England’s trio of World Cup qualifying fixtures this month after sustaining an injury to his oblique abdominal muscle,"Everton announced on their website.

Pickford will be unavailable for the FA Cup quarter-final tie with Manchester City on Saturday as well as the upcoming England games.

It is not yet known if he will be fit to return to the starting XI for the Premier League match against Crystal Palace on April 5.

Pickford suffered a similar injury in February and missed four of his sides matches.

Pickford has made the starting XI in six of Englands last eight matches.

On the two occasions he was left on the bench, Burnley shot-stopper Nick Pope tookhis place.

Gareth Southgate will announce his squad for the 2022 World Cup qualifying matches on Thursday.

At Everton, Joao Virginia could be called on to start in goal against City after the 21-year-old replaced him on Saturday to make his first senior appearance of the season.