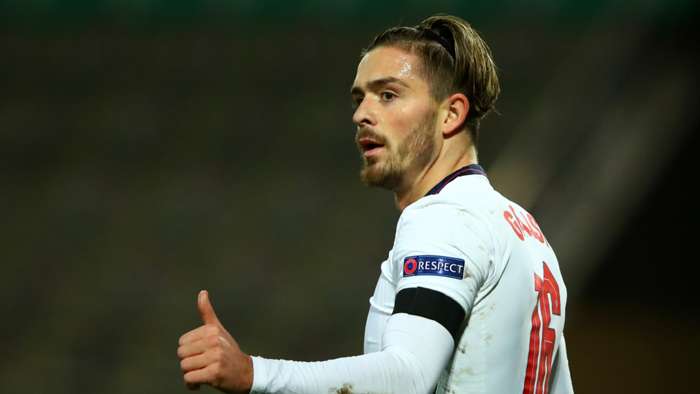 Jack Grealish can cope with theincreased expectations following a strong start to his England career, though Gareth Southgate hasemphasisedsuccess will only be achieved as a team.

He set up Jadon Sancho in a 3-0 win over the Republic of Ireland last week and was bright in a 2-0 loss to Belgium on Sunday, attempting more passes in the opposition half than any player on the pitch and drawing a game-high seven fouls.

That result ended England's hopes of reaching thelast four of theNationsLeague andthere have consequently been calls for Southgate to begin building his team around Grealish, who has been involved in 12 goals in as many appearances for club and country this season.

Asked whether it was important to manage the expectations on Grealish ahead of Wednesday's meeting with Iceland, Southgate told a news conference: "I think that's always important with any player, we are going to succeed or fail as a team. It's for everybody to contribute.

"We've tried to ensure over the past four year thatit'scollective expectation, we could put pressure on Harry Kane, Raheem Sterling, other players, and it needs to be the same with Jack.

"He's had a super start to his international career. I think he'll be able to handle the attention because he thrives under that pressure. He's got great courage with the ball, so I don't think that'll faze him. Equally,it's going to be the squad that brings us success as a collective."

There has been a focus on the performances of Marcus Rashford following his charity work to help reduce food poverty among children in the United Kingdom.This week he also launched abook club for kids.

Amid criticism from certain parts of the media and suggestions he should focus on football, Southgate has been leftbaffled by the treatment of the Manchester United forward.

"I don't really understand those comments. The days where the players just focused on their football and did nothing else are in the far distant past," he said.

"Modern players recognise they have an opportunity to make a difference, whether that's in their local community or on a broader scale, they have a voice and a social media presence.

"You know as a sportsman you're going to have a second career when you finish football, that's the reality, so I don't know why they would limit themselves to just one thing.

"Of course, it's important you're training and focus on games isn't affected, but it's possible to achieve that balance."

Another player in the embryonic stages of their international career is 17-year-old Borussia Dortmund midfielder Jude Bellingham.

When told Bellingham wears the number 22 because he was challenged to be capable of playing as a number four, eight and 10 at former club Birmingham City, Southgate said it is important not to try tocategorisethe teenager as a specialist in any oneposition yet.

"Well, I think he could end up playing any of those roles. At Dortmund he's playing as one of two fours or as an eight, and most of the time at Birmingham he was kind of in the position of an eight really," said Southgate.

"But he's so young, you don't have tospecialiseyet. With a lot of midfield players, it's more important he learns the game, he gets brilliant experiences playing in whatever positions might be his strongest and as time develops it'll probably become apparent which is his more suited position.