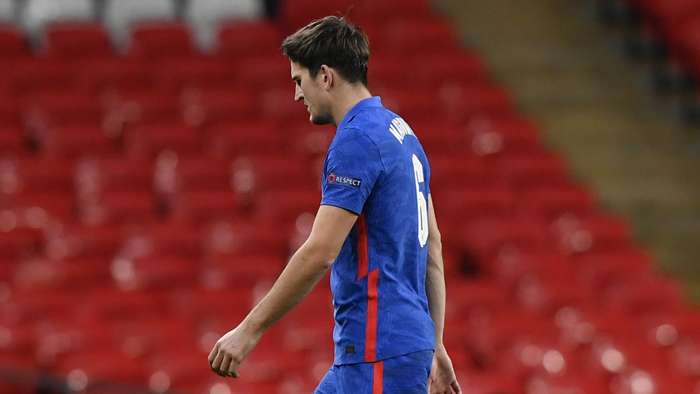 Gareth Southgate has admitted that Harry Maguire is going through a difficult period after the England defender picked up a first-half red card against Denmark.

The Three Lions were unable to overcome the centre-back's expulsion, as Christian Eriksen's goal from the penalty spot gave Denmark a 1-0 victory on the evening.

"I think the first yellow was a challenge he didn't need to make, and that puts him on edge," Southgate toldBT Sport after the game."The second one, it's an interception and his momentum takes him through and into the player."

The England boss would also offer his backing to the defender, who has had a trying couple of months both on and off the pitch.

Maguire has played his part in Man Utdconcedingnine goals in their first three league matches, while he was also found guilty of aggravated assault, resisting arrestand attemptedbribery after an incident in Mykonos, Greece in August.

"For me, he's a top player," Southgate said. "He's a massive part of what we do. He's having a period where he's getting a lot of stickthrown his way. And he'sbig enough to deal with that, he'll come through it, he'll bestronger for it. He's got our full support and I knowhis club will be the same.

"I think for any person,none of us like to be the centre of that sort of storm. When you're a bit older, you can rationalise it and you've experienced it before and you can move forward with it.

"He is experiencing it really for the first time I would say -not that he's never hadsetbacks in his career before,because no player gets to the level he is without having had setbacks.

"But his profile has changed over the last couple of years because of the club he plays at, because of the success he's had with us. And he's having one of those periods where things are going against him, but you have to hang in and it will turn."

England captain Harry Kane also gave words of encouragement to his team-mate after a difficult evening.

"It's all part of the learning curve, and the experience of international football," Kane told Sky Sports.