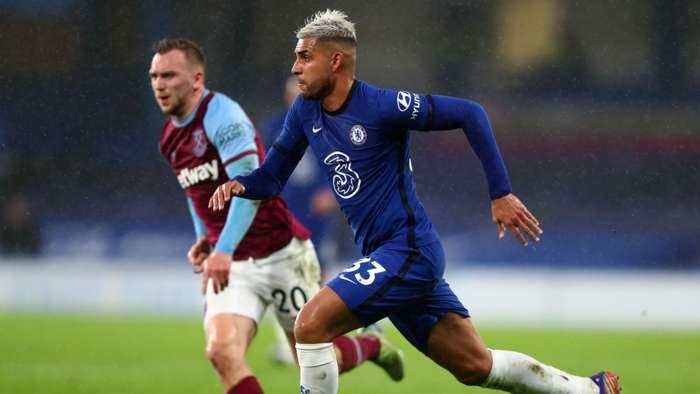 Emerson has insisted that he's "always ready" for Chelsea boss Frank Lampard amid rumours of a potential return to Serie A.

The Italy international was restricted to just 21 appearances in totalfor Chelsea last season, and competition for places in defence has increased after a spending spree in the summer transfer window.

Ben Chilwell has been Lampard's first-choice left-back since his £50 million ($68m) movefrom Leicester, leaving Emerson's future at the club in doubt.

The 26-year-old, who joined the Blues from Roma in an£18m ($24m) deal two-and-a-half years ago, has only appeared in nine games so far this season, with his latest run-out coming in a 4-0 victory over Morecambe in the third round of the FA Cup.

Chelsea have been tipped to cash in on Emerson before his current contract expires in 2022, with the likes of Inter and Juventus reportedly interested in bringing him back to the Italian top flight.

However, the former Roma star says he's still fully committed to the collective cause at the Bridge, and was pleased to help Lampard's side bounce back from a damaging Premier League defeat to Manchester City by overcoming League Two side Morecambe on Sunday.

"I feel good because I’m training hard every day, I’m always ready when the manager puts me on the pitch and I try to do my best,"Emerson told the club's official website.

"The game yesterday was very important for us because in the last game we lost. So the most important thing was to have a solid game and get the victory, like we did."

The Chelsea defender was a constant threat in the final third against Morecambe, and although he was disappointed not to get on the scoresheet, he was happy with the freedom he was afforded in a forward-thinking formation.

"I tried three times, it didn’t happen in this game, but I’m happy for the team and the result,"Emerson added.

"Callum Hudson-Odoi, Hakim Ziyech or Christian Pulisic, they like to stay between the lines, so for me, I have the space for the overlap. Or yesterday, Callum stayed high more with me inside, so this is a good connection.