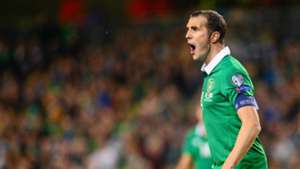 Former Republic of Ireland internationals Damien Duff and John O'Shea have joined their country's coaching staff following the appointment of Stephen Kenny as manager on Sunday.

Kenny replaced Mick McCarthy as Ireland boss early, with the 48-year-old previously set to take over for McCarthy following Euro 2020.

With the tournament postponed until 2021 due to the coronavirus pandemic, Kenny has stepped in and has now appointed several former Ireland internationals to his backroom staff.

Duff joins Keith Andrews as new members of the senior team's coaching staff, while Alan Kelly will continue on as goalkeeping coach.

Meanwhile, Jim Crawford has taken over for Kenny as Under-21 boss, with former Manchester United defender O'Shea joining as his assistant.

"Keith and Damien served Ireland so well as players and their experience will be such an addition to our senior squad's support team."

Duff, who made his name as a player with Blackburn, Chelsea, Newcastle and Fulham, will continue his managerial career after serving as an assistant with Scottish champions Celtic since February 2019.

After announcing his retirement from football in April 2019, O'Shea has now also embarked on a coaching career and has been serving as a member of Reading FC's backroom team.

"Everyone at the FAI is delighted with Jim's promotion to manager from assistant and he has a great number two now in John O'Shea as he takes the next step on his coaching career," Owens added.

O'Shea spent a decade at Manchester United, where he won five Premier League titles and one Champions League before moving on to Sunderland ahead of the 2011-12 campaign.

The defender spent seven seasons with the Black Cats before joining Reading in 2018.

Ireland will take on Slovakia in the play-offs for the European Championships, but the timing of the two-legged affair is currently unknown as the coronavirus pandemic continues on.

Kenny's side will be looking to return to the European Championships after reaching the round of 16 at Euro 2016.