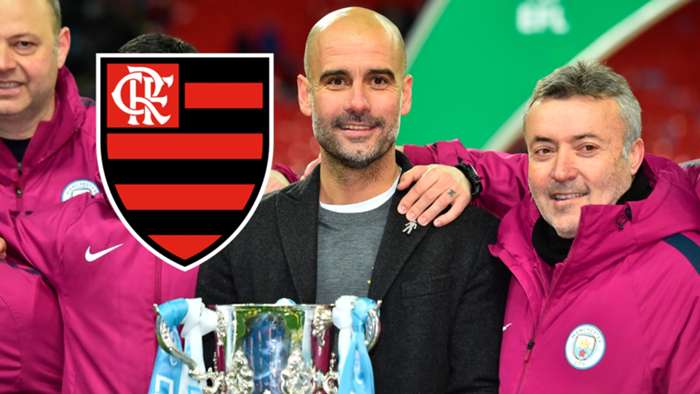 Stepping into Jorge Jesus' shoesat Flamengo would promise to be a daunting task for almost any coach on the planet.

Add to that wins in the Carioca Championship, Brazil's Supercopa and the Recopa Sudamericana – of six competitions disputed during his tenure, only the Club World Cup, lost in agonising fashion to Liverpool, escaped Jesus' grasp – and one can see the scale of the challenge in taking over from the brilliant new Benfica boss.

It is no surprise, then, that Fla's latest man on the bench thought carefully before stepping into the breach. Luckily for Domenec Torrent, he can boast none other than Pep Guardiola as his long-time friend andconfidant, ensuring the most knowledgable of advisors for such crucial decisions.

“We speak very often due to the friendship we hold and he told me, 'if you feel ready don't pass up this opportunity',” Torrent, who worked with Guardiolafor a decade as part of his backroom staff at Barcelona, Bayern Munich and Manchester City before stepping out as a coach in his own right in 2018, told reporters when asked if he had contacted his mentor prior to accepting the Flamengo job.

"'This only comes along once in a lifetime, because Flamengo are one of the best clubs in the world.'”

Pep's association with the new Flamengo boss stretches back to his very first days on the bench during the summer of 2007, when fresh from retirement he was handed control of Barcelona's B team to cut his teeth down in the fourth-tier Tercera Division.

Torrent, meanwhile, almost 10 years the Blaugrana star's senior, had coached a succession of lower-league sides across Catalunya to varying degrees of success. But when Guardiola came calling with the offer of acting as a tactical analyst in his staff, he did not hesitate.

The rest, as they say, is history. Guardiola, ably advised by assistant Tito Vilanova and Torrentbehind the scenes, took Barca B up to the Segunda Division B in his debut season -a feat that earned him a surprise call to take over the senior side.

Just 12 months later the Blaugrana were left celebrating their first treble in the club's history, the first of a total of 24 trophies that Torrentwould lift under Guardiola's watch; initially as an analyst, then as Guardiola's assistant when he left for Bayern in 2012, ceding the Barca reins to Vilanova.

Unsurprisingly Torrent, whose last coaching experience came during a short yet successful spell in MLS with New York City FC, shares whole-heartedly in Guardiola's vision of playing the game, which he helped to fashion over years of close collaboration.

“You can win in any fashion. But you have to create your own style,” the 58-year-old explained to El Pais in an interview published shortly before he left for Rio at the start of August, when asked about the current Barca team's shortcomings.

“You can lose with any style, but if you also lose your style you are left with nothing when you lose, you can only keep signing players to see if they can work it out.”

There is great anticipation around Flamengo and in Brazilian football as a whole about the arrival of Torrent, but also no little uncertainty.

He has precious little time to impose his possession-first style on the Serie A champions, who under Jesus achieved unprecedented success with a system that prized rigid organisation without the ball and dynamic, rapid transitions when going forward, utilising the entire pitch with ex-Inter forward Gabriel Barbosa at the apex of their offensives.

Torrentalso faces an additional challenge. The coronavirus pandemic has delayed the start of Serie A in 2020 for almost four months, creating an alarming fixture backlog.

Flamengo begin their league defence on Sunday at home to Atletico Mineiro and finish the campaign in February, leaving just six months to play out the 38-game season. If the Rio side advance deep into the Libertadores knockout stages they face a daunting run of 50 matches in the next 200 days, enough to test even the deepest of squads.

One thing is clear, though: like his mentor, Torrentis out to achieve big things.

“Everyone knows I have a philosophy very similar to that of the coach I have worked with the last 10 years,” he told reporters on Monday shortly after arriving in Rio to a fevered reception from Flamengo fans.

“I like to attack, I'd rather win 4-3 than 1-0 because it is important to the supporters. I know that for teams like Flamengo it is all about winning, winning and winning, but winning is not everything, it is how you do it as well, and it is important to play nice football.”

It will not be a straightforward task, with Flamengo's rivals both at home and abroad itching to topple the kings asgames comethick and fast.