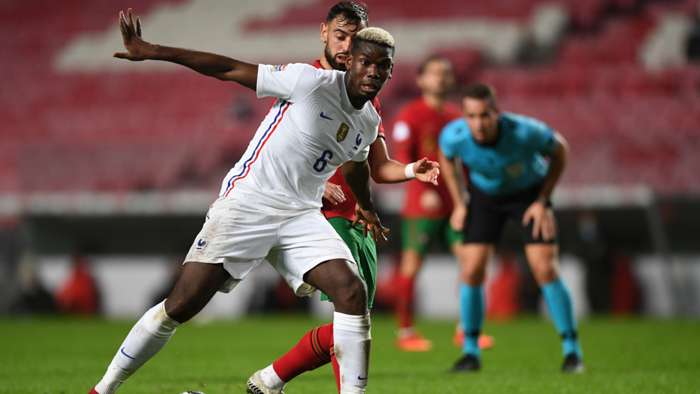 France coach Didier Deschamps paid tribute to his charges on Saturday after Les Bleus squeezed past Portugal to book a place in the UEFA Nations League finals.

Paul Pogba, Antoine Griezmann and Raphael Varane are among the France stars who have endured a muted start to the 2020-21 season, while Deschamps' plans were further interrupted by the withdrawal of Kylian Mbappe after the Paris Saint-Germain striker failed to recover from injury in time for Saturday's game.

Earlier in the week,Deschampshad admitted that Pogba's struggles at Man Utd have "mentally impacted" him.

Les Bleus nevertheless came through to down inaugural Nations League champions Portugal and make it through to the semi-finals with a game to spare, with N'Golo Kante's goal sealing a tense 1-0 victory in Lisbon.

And Deschamps was delighted to see how his men overcametheir club strife to come through for their country.

"It’s great to see the players like that, to come out and win here. This victory is deserved, with a lot of solidarity, also of quality," the coach explained toTF1after the final whistle.

"We achieved our goal, we wanted to finish first. Whatever happens in the last game, we'll stay first. It’s good to reach our goals, I’m very proud of the players.

"It's not always easy, especially during these complicated times. Some have club situations which are not the best. But when they meet here, there is still that competitive spirit and tonight they have proven that the France team is still a great team.

"Taking into account the quality of the opponent, obviously this is a benchmark match. I'm not talking about the one we played three days ago against Finland but in a game like today there is less need to warn them about the goal. They prefer to play these matches but the group is there and present. They have proven that the state of mind is still there."

Varane added toTF1: "We are happy with the victory and the way we played. We had the right spirit of solidarity. We could have scored in the first half. We hadchances but we were solid and united because they were dangerous in the air. They managed to put danger in front of the goal but we responded.

"The final four was the goal from the start. We wanted to win to ensure qualification, but above all with style. We are really satisfied tonight. This is our benchmark game over the past few months, we have seen everything, good things, good combinations, good defense all together.

"We will be able to rely on this to project ourselves towards the next objective."