Depay to Barcelona: Matured Memphis can put Man Utd misery behind him at Camp Nou 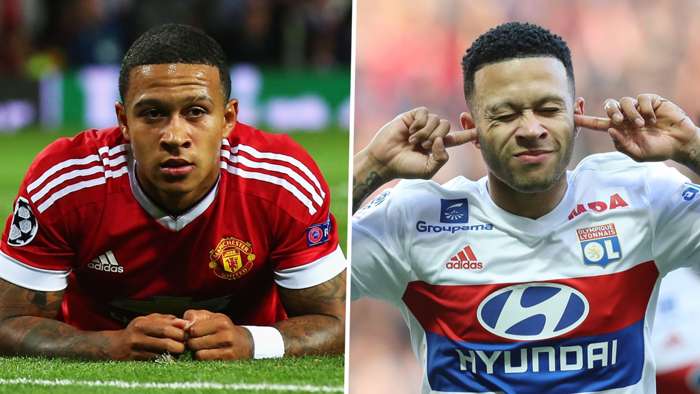 Memphis Depay has himself admitted it: his opportunity at Manchester United came too soon.

Instead, he left for Lyon 18 months later, with 33 Premier League appearances and just two goals to his name.

Now 26, Depay has earned his move back to the big time and is better placed than ever to profit from the opportunity that Barcelona are set to give him when he finally completes a move to Camp Nou.

“My mental state is different. I am a more matured human being now than when I was in Manchester,” he told The Mirror last year.

These are not simply words from a man whose fingers-in-ears celebration is one that OL supporters have grown happily accustomed to over the course of his stay in the Rhone Valley.

It is easy to look at Depay's statistics from his time in Lyon and be impressed.

In a campaign cut cruelly short by serious injury last term, he posted nine goals in 13 league outings but tellingly scored in six of eight Champions League fixtures as Lyon made a shock run to the semi-finals, accounting for Manchester City along the way.

Despite a cruciate knee ligament injury that he fought valiantly to come back from, documenting his tale closely via social media, he has started the new campaign explosively, netting four of the five goals that Rudi Garcia’s men have scored this term.

Beyond that, though, he has made himself an indispensable member of the squad, a genuine leader, not just with his goals but by his actions, too.

For Memphis, when he is on the field, his team-mates come first – even at the risk of upsetting the fans.

His leadership capabilities truly came to the fore following a Champions League draw with RB Leipzig last season. It was a point that secured their berth in the knockout stages, yet the supporters were in the midst of a revolt and brandished a banner at the side of the pitch after the match that called centre-back Marcelo a donkey.

“I’m upset, angry. I don’t know what to say,” Memphis, clearly furious, told RMC Sport. “You know how hard it is for the team when we know that somebody on our team has troubles with the supporters? What do you expect from us?

“You go to the supporters and thank them and they say crazy, crazy things about somebody’s family, somebody’s kids. I’ve got no words. It doesn’t make sense.”

But he delicately traversed a fine line between making his point and becoming unreasonable.

Supporters, though, are not the only ones to have drawn the frustration of the Dutchman. His celebration is a message to all those who have not believed in him or who have voiced their criticism of him.

Like ex-United team-mate, Paul Pogba, Memphis’ off-field activities, his interest in music and fashion, notably, have drawn as many headlines as his efforts on the park. Not that he cares: it’s all part of the package.

“I’ll always be the guy I am, so of course I’ll be a little misunderstood. Some people wonder why I make music, why it looks like I’m pissed off, why I act like this. Honestly, it’s something I accept,” he said to France Football last month.

“I’m in pursuit of happiness and these things make me feel happy. Football is the thing that brings me the most pleasure, but I don’t play it around the clock. I need to find something else. I have many passions, many talents, so why not?

"If I feel good with what I’m doing, let me be, I’m at peace. It’s only under these conditions I can play my football. If the coaches understand this, why shouldn’t I?”

At Barcelona, he should find a manager in the form of Ronald Koeman who gets him, the pair having corroborated for two years previously with the national team.

And even if the critics continue to point to Memphis’ extra-curricular activities as being to the detriment of his footballing performance – as they will surely do – he remains a player with the ambition to reach the very top.

“I’m not even half-way through what I want to achieve,” he wrote in his 2019 autobiography ‘Heart of a Lion’. “It's quite a list.

"Playing for Real Madrid. Winning the Champions League. Getting the Golden Ball for world's best player. Having €100 million in my bank account when my career ends. Starring in music, film and fashion. Starting a family. Doing good work in Ghana and other countries.

"I will conquer mountains whose height I don't even know yet.”

He may need to rub Real Madrid off of that bucket list very soon, but if those other lofty goals are to be fulfilled, this is the chance he has to take.