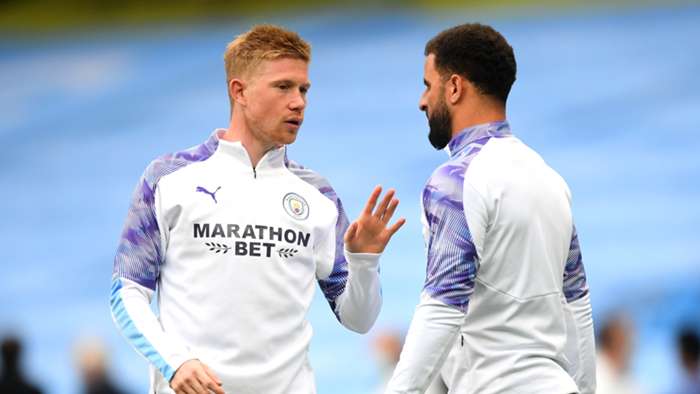 Kevin De Bruyne has cometo the defence of Kyle Walker after Roy Keane had labelled the Manchester City right-back "an idiot".

The 30-year-old recently reached a century of games for Pep Guardiola's side since leaving Tottenham in 2017 and Walker'sBelgium team-mate has nowhit back at Keane's claims.

"I think from the moment that Kyle came to the team, he's been one of the most consistent performers with us," De Bruyne said.

"Obviously when you compare every position it's different. You can't compare the work that Kyle does to, for instance, Trent Alexander-Arnoldat Liverpool.Trent is the more offensive player and Kyle has to play a different role for us, but he does it really well and there's a reason why he's playing all these years at this level for all these teams. It means he's been really good.

"Okay, what Roy Keane says...he's a different man and everybody knows that. But, okay, it's his opinion and he'll take it on the chin. He's going to be fine with it."

"I think he’s playing extremely well. Observations and analysis are fine, I think personal criticism less so, I think we have to be careful about that," Southgate said of the criticism.

”I’m very happy with what Walker is doing. He’s playing every game for his club because the manager trusts him and feels he needs him so if he’s doing that for Pep it’s an indication of the quality."