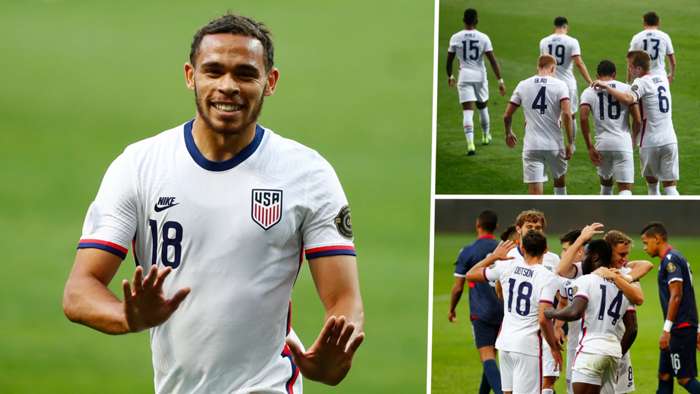 All very fair descriptions of the U.S. Under-23 mens first-half performance against the Dominican Republic in Sundays Olympic qualifier.

If the first game-and-a-half of their tournament run was any indication, this U.S. team is one that would struggle in their group stage finale against Mexico and, ultimately, in a potential semi-final with a spot in Tokyo on the line.

Pre-tournament concerns around this team all centered around creativity and, through the first 135 minutes of their CONCACAF Olympic qualifying campaign, those concerns seemed justified.

But then came the second half, one that showed exactly what this U.S. could be when firing on all cylinders. Within a 30-minute span, the U.S. changed every perception, looking every bit like a team that can, and should, emerge from this qualifying tournament with an Olympic berth in their back pocket.

After 60 scoreless minutes of fairly mediocre soccer, the U.S. absolutely blitzed the Dominican Republic with four rapid-fire goals to seal a 4-0 win that, thanks to a Mexico victoryover Costa Rica, officially pushes them into the knockout rounds.

"Its a difficult match,I think,in a lot of ways," head coach Jason Kreis said."Its very difficult to break down a team that sits so deep.

"They also played in a completely different shape than weve seen them play ever before so to have them come out withfive backand sit so deep, I think we had a lot of trouble breaking that down.

"You can add thefact that I felt our guys were just a little bit too cautious about the affair. I think our guys were more concerned about the transition than they were about creating attacking moments.

"Those two things add up tonot a great performance in the first half, but what we saw the second half was much improved and were pleased to walk out with another three points."

Kreis made six changes to the U.S. sidefor Sundays match, a predictable decision given the number of games in quick successionduring this tournament.

Andthrough the first half, the U.S. looked like a team still struggling for form, fitness andchemistry.

Facing a DR team that did their best against Mexico, only to still be battered 4-1, the U.S. struggled to create much of anything through the first 45 minutes. Jackson Yueill, the U.S. captain and a vital hub of creativity from a deep-lying spot, was keptquiet once again.

Jesus Ferreira found one or two chances to fire straight at the opposing goalkeeper but was devoid of service. Fullbacks SamVines and Julian Araujo struggled to get forward and offer much-needed outlets for a U.S. team that was seemingly swamped every time they crossed the halfway line.

But, in the second half, the pendulum swung. Yueill, who started as a No.8 with Andres Perea taking his typical No.6 role, moved back into a deeper spot to find more of the game. Vines and Araujo began to get forward while the introduction of Hassani Dotson in the 62nd minute saw the game turn on its head.

"I felt that we were just way too cautious inthe first half," Kreis said."The picture that they were presenting to us was extremely defensive, five players in the back, nobody releasing in wide spacesandboth of our fullbacks were extremely hesitant about going forward. It just didnt add up or make any sense.

"We needed to get those players really high. We needed to be looking for wide combinationsand we just werent getting the job done, so for me it was mostly about positioningbut also about intent and attitude."

It was Yueill who provided the first goal just before Dotson came on, a fortunate flick of a Sebastian Saucedo cross that produced an American-sized exhale for all of those watching at home.

From that point, Dotson and the U.S. took over, looking completely different than the team that sleepwalked through the first half.

Dotson fired his first in the 73rd minute and his second five minutes later, giving the U.S. a much-needed cushion. Djordje Mihailovics finish in the 90th minute, then, was one for good measure, giving the U.S. one last flurry of momentum heading into that group stage finale against Mexico.

The U.S. will need to win that match to finish top of the group, with Mexicos 3-0 win over Costa Rica enough to give them the advantage on goal difference.

When Wednesday comes, Kreis will have a number of decisions to make, as he looks to balance a rivalry clash, semi-final seeding and, perhaps most importantly, fitness heading into the all-important knockouts.

"The idea of rotation in this tournament is very interesting," Kreis said, "and the idea, in this tournament, about rotation for us right now is that I dont even know if thats something that makes sense because every field player thats here on our roster has now contributed.

"Wehad six changes to the starting line-up today, so what is and what is not our best group is still to be determined. These are the decisions that the coaching staff will makebecause we will want to beat Mexico. We want to win this group."