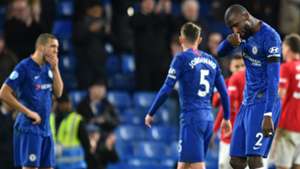 Mateo Kovacic says Chelsea need to "wake up" in their ongoing bid to secure Champions League qualification and prove that they can turn potential into being a "great team".

The Blues saw their top-four bid suffer another untimely blow on Monday when slipping to a 2-0 home defeat against Manchester United.

Frank Lampard's side have now come unstuck against the Red Devils on three occasions across all competitions this season.

Their latest reversal has left them just one point clear of the chasing pack in fourth, with United moving to within three points of the west London outfit.

Fifth could be enough to secure a seat at European football's top table this season, with Manchester City having been stung with a two-year Champions League ban by UEFA.

They will, however, be appealing those sanctions and Kovacic admits that Chelsea need to raise their game and keep fate in their own hands.

The Croatia international told the club's official website on the back of a frustrating evening against United: "We need to improve a lot because we have tough games ahead of us and we have to be focused.

"We have to train hard every day, to prepare our games better and try to avoid our mistakes because we are making too many mistakes in these kind of matches and you get punished.

"We have a good week ahead of us to prepare for Tottenham and to play a good match. We know this match means a lot for us because Tottenham are close behind us so we need to prepare ourselves quite a lot to win this game at home.

"We are still fourth so we are still in a good position but we need to wake up because they are coming from behind. We need to play these next games like we were playing in the beginning of the season and change some things as well, obviously."

Chelsea saw two efforts ruled out by VAR against United, but Kovacic is not looking for excuses at an important stage of the season and wants the Blues to prove that they can come through struggles for consistency and cement a standing among the Premier League elite.

He added: "We played well in the beginning but it's always the same against United - we play good, we create chances, we don't score and then they score from one opportunity.

"We don't have the three points and that's the most important thing. It was a good game from us, we played well, like we have for more or less the whole season, but we made some silly mistakes and we lost the points.

"We are still a very young team and we need to improve a lot. Now we will see if we are a great team because we have some tough matches to fight for the fourth position and we need to show ourselves."

Chelsea have a derby date with old adversaries Tottenham to come on Saturday, before attention then turns to the first leg of a heavyweight Champions League last-16 encounter with Bayern Munich.