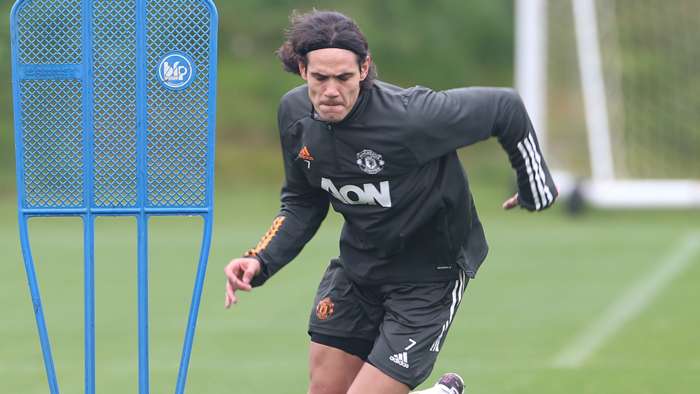 Edinson Cavani trained with his Manchester United team-mates for the first time on Sunday ahead of a potential reunion with Paris Saint-Germain in the Champions League on Tuesday.

The 33-year-old forward was forced to undergo mandatoryquarantine at the behest of the United Kingdom's government, however, in line with their regulations amid the coronavirus pandemic.

Those regulations dictated that he was unable to link up with Ole Gunnar Solskjaer's side in time for their Premier League win against Newcastle on Saturday.

Now, with his exile over, the striker has been able to join the rest of United's squad ahead of their first European match of the season, putting him in line for a possible immediate return to his old stomping ground at the Parc des Princes.

United took to social media to release footage of Cavani for the first time, showcasing the forward undertaking drills alongside the rest of the squad.

The ex-Napoli man is one of four specialist attackers named by the club on their A-list for the competition, alongsideAnthony Martial, Marcus Rashford andOdion Ighalo.

If picked in midweek, Cavani will be thrust into the heart of United's first Champions League campaign for two years, only months after his former side were downed in the final of last season's competition by Bayern Munich.

Cavani spent seven years in the French capital, scoring 200 goals in 301 games and helping them cement a period of dominance at the summit of the country's domestic football pyramid.

During his spell with the club, he topped the Ligue 1 goalscoring charts in consecutive seasons between 2016 and 2018, and was named the league's Player of the Year in 2017.

On the international stage, Cavani was a member of the Uruguay squad who finished fourth in the 2010 World Cup, while he helped his nation to consecutive knockout stage appearances in 2014 and 2018 during his stay in Paris, ultimately losing out to eventual champions France in the latter.