Build around Thiago or take him out? The risks Klopp must take to get Liverpool out of their slump 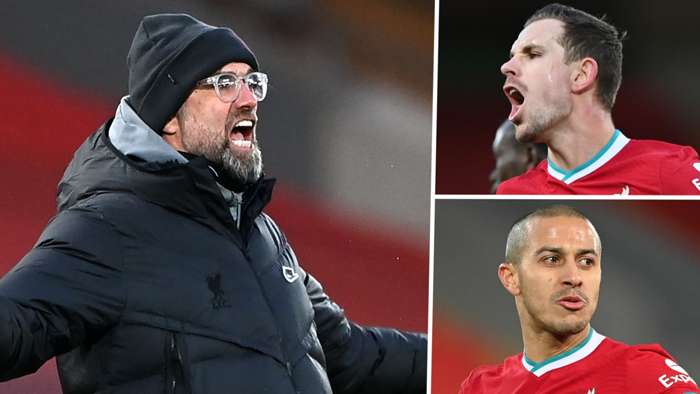 Does the pandemic excuse Liverpool’s poor form, or does their inability to adapt to its challenges pointto mismanagement; to an inability to take a risk on a new, pandemic-centred approach?

For now, the overwhelming injury list protectsJurgenKloppfrom more difficult questions regarding the future of his team, but that will probably end if, after Liverpool have played Leicester City, Everton, Sheffield United, and Fulham in their next four league games and are not back in full swing.

That isbecause the Fulham game would complete a 38-game Premier League season since the Reds'3-0 defeat to Watford back in February 2020 triggered the end of their immaculate start to the previous campaign.

There are numerous mitigating circumstances of course, not least thattheir difficult final 11 games of the 2019-20 season can be offset by the fact Liverpool had already sealed the title.

And yet the issues in 2020-21 are notquite so easily explained, even with the injuries taken into account, especially now that Manchester City – on a 15-game winning streak – have proventhat it is possible to work out pandemic football and adapt accordingly.

To do so, you have to gamble.

Liverpoolhave notadapted. In fact, their style of football has remained alarmingly consistent even as opponents increasingly alter their own tactical battle-plans to neutralise the flying full-backs or the narrow front three.

It is too early to panic, of course. One strong summer of signings, a pre-season reset, and a clean bill of health may well be all it takes to putKlopp’sLiverpool back on top.

But in the meantime there are tactical flaws that need to be urgently addressed, and a deepening sense thatKloppneeds to shake things up if he is to prevent a full 38-game season of underperformance.

The most urgent change has to bestoppingthe use of two central midfielders as centre-backs. It is understandable thatKloppfeels experienced players and cool heads are needed to shepherd the defence during this injury crisis, but moving both Jordan Henderson andFabinhodeeper has significantly affected Liverpool’s control of central midfield.

Klopp’smodel depends on grinding teams into submission via wave after wave of sustained attack – a system that then allows the full-backs to stay high and relentlessly push for an opener.

Liverpool won 14 league games by a single goal last season and outperformed their expected goals (xG) toa total of24.72 extra points, per understat.com, reflecting the fine marginsof victory. WithoutFabinhoscreening, and then sharply turning in possession to recycle the ball back forward, this threat is lessened.

Similarly Henderson, the missing piece in the jigsaw when he first moved to the right side of central midfield, is needed for his momentum-building energy. The way he barks orders, demands the ball, and plays with his head firmly up – and forward – is vital in setting the tone for sustainingthose waves.

Kloppmust be a little braver and throw his new signings onto the pitch, trustingAlissonBecker and the rest of the back fourtodirect Ben Davies andOzanKabak.

The Liverpool manager, meanwhile, seems so wedded to the 4-3-3 that even when another formation is used successfully, he cannot help but be drawn back to the system that worked so well for the club at their peak.

In the 1-1 draw with Manchester City in November he used a 4-2-4, with long balls aimed at getting those forwards into advanced positions as quickly as possible while RobertoFirminodroppedoff the front even more than usual.

It helped Liverpool look more creative in midfield, an area that has often been a little workmanlike underKlopp, and yet we have scarcely seen the system since.

For the recent 3-1winat West Ham, Klopptrialled a diamond 4-4-2, and although it was notparticularly fruitful in the first half, the Liverpool manager moved very swiftly to get rid of it. They went on to win the game, but have lost both matches since with the diamondbanished.

Sometimesgetting out of a slump simply requiresa fresh perspective. Shaking things up can loosen limbs andshift restrictive movements. Right now the 4-3-3 - too narrow to hurt emboldened and stubborn defensive shells, andtoo reliant on full-backs who no longer are able to sit high – looks stale.

Kloppshould take a risk on something completely different, while there is also something of a conundrum to solve with Thiago Alcantara.

Liverpool have won eight points from eight Premier League games in whichThiagohas started,a startling statistic that seems to capture a lot of the concern among Liverpool supporters at the moment.

The summer signing from Bayern Munichis a symbol of their season in more ways than one.

The theory is thatThiagois too prosaic in possession and notaggressive enough in the tackleto operate inKlopp’ssystem, and that Liverpool’s record with the Spain internationalin the team is symptomatic of their more general malaise.

There is some truth to this, although their inability to sustain attacks has more to do with losing Henderson andFabinho, as already discussed.

Clearlythere is too much pressure on Thiagoto succeed within months of his arrival, despite the well-established pattern at Liverpool of slow integration.

In fact, the deeper truth behind theThiagoconundrum is thatquestioning his impact speaks to anxiety about the club’s underwhelmingrecent transfer windows.Anet spend of around £9 million ($12.5m)over the last two seasons was clearly notenough.

With time,Thiago’splaymaking from deep will add a new line-breaking dimension to theLiverpool midfield. What ismore, his propensity to slow the game down -to dominate through tempered possession -aligns with how pandemic football should be played (according to Man City, at least).

Thiagoadds control at the expense of momentum. He plays well but ends up on the losing side. He is a symptom of Liverpool’s malaise, not a cause,but nevertheless his presence in the team brings confusion and disagreement.

In other words, it should be solved in the same wayKloppshould approachthe tired 4-3-3, the out-of-place Henderson andFabinho, and the new centre-backs.