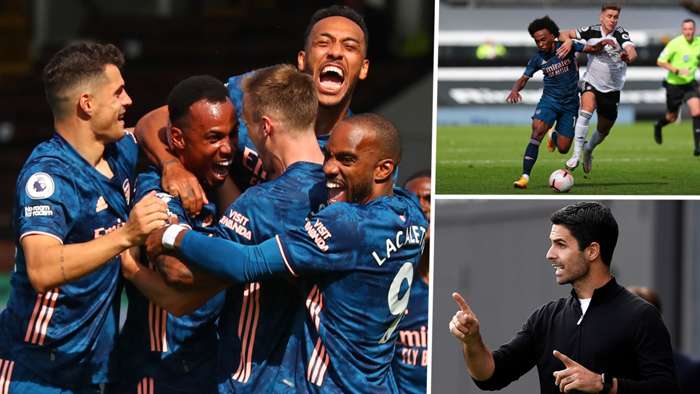 Arsenal’s Samba boys revelled in the west London sunshine as Mikel Arteta’s side got their new Premier League season off to the perfect start at Fulham.

It might only be just over a month since Pierre-Emerick Aubameyang lifted the FA Cup at Wembley, but this is already has the look of a very different Arsenal team – one with their new signings at the heart of it.

Willian and Gabriel Magalhaes were handed their full debuts and Arsenal’s Brazilian pair shone as the visitors opened up their new campaign with a thumping 3-0 victory.

There was a goal for Gabriel on his debut and two assists for Willian, who was also heavily involved in Alexandre Lacazette’s opener. As opening day fixtures go, this was as good as they come for Arsenal.

There is still plenty of work to do and there will be more changes before the transfer window closes on October 6, but the way they blitzed new boys Fulham at Craven Cottage bodes well for the remainder of the campaign.

Having ended last season on such a high, Arteta will have known the importance of hitting the ground running this time around and avoiding any early slip-ups.

Things didn’t exactly get off to the best of starts when substitutes Dani Ceballos and Eddie Nketiah were involved in an angry flare-up during the warm-ups. But once the game got under way, it was nothing but smooth sailing for the visitors.

Gabriel was at the heart of a back three alongside Rob Holding and Kieran Tierney and, after a couple of nervy early touches, the Brazilian cruised through the game like he was having a gentle kick about on Copacabana beach.

The 22-year-old made Arsenal tick from the back, getting himself on the ball and getting his team moving forward. He made 113 passes in total– 20 more than any of his team-mates, 106 of which were successful.

And on the rare occasion Fulham did get some possession in their final third, he was often on hand to win the ball back and clear his lines.

There will certainly be far tougher tests for Arsenal’s new boy as the season progresses, but on this evidence it’s no surprise that the north London club were so determined to beat Napoli, Manchester United and Everton to Gabriel's services.

It was the perfect debut, capped it with a goal when he rose unchallenged to head home from Willian’s corner early in the second half.

By that point, Arsenal were already firmly in command thanks to a dominant first half which saw them go into the break with a one-goal lead given to them by Alexandre Lacazette’s eighth-minute strike.

Willian – who ended the first half with a passing accuracy of 100 per cent– was at the heart of build-up, seeing a shot saved before Lacazette buried the rebound.

It was a scrappy goal, but there was nothing scrappy about Willian’s performance. The former Chelsea man looked a threat every time he got on the ball, causing the Fulham defence real problems with his direct running and quick feet.

And he carried that form into the second half, curling in the corner for Gabriel to double the lead and then picking out Pierre-Emerick Aubameyang for Arsenal’s stunning third goal.

A move that started at the back, with Bernd Leno, Gabriel, Granit Xhaka and Hector Bellerin all involved before Mohamed Elneny’s charge forward ended with Willian picking up possession.

The Brazilian sprayed a wonderful cross-field pass to Aubameyang, who surged forward from the left and curled an unstoppable shot into the far corner to open his account for the new season.

Arsenal could have had more in the final half hour, with Aubameyang having an effort cleared off the line and Lacazette also going close.