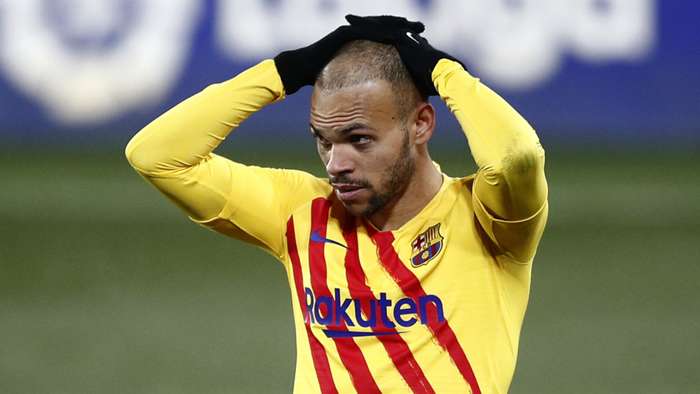 Martin Braithwaite “likes” that Barcelona are in the market for another forward, with the Denmark international vowing to remain at Camp Nou and fight for his place.

It has been suggested that more firepower will be sought in upcoming windows, with the Liga giants eager to reinforce in a vital area of the field.

Any incomings could knock Braithwaite further down the pecking order, but he will not be walking away from the challenge.

The Dane, who was a shock signing for the Blaugrana in February 2020, told TV3: “I like that other players are sought out.

“It is supposed to be like that in a club like this, which aspires to have the best in the world.

“You need to have internal competition.You can't trust everything to a small group of players.Only in this way will you get the most out of the players and the team in each game.

“It doesn't scare me, it motivates me.”

There have been reports that Barca may look to free up funds for additions by moving Braithwaite on.

He is, however, adamant that he no exit has been agreed for the January window or end of the 2020-21 campaign, with it his intention to stay put.

A man who has netted six times through 30 appearances for the Blaugrana added on his future plans: “There is no option to leave Barca in this winter market.And not at the end of the season.Next year I will continue here fighting for my goals.

“This season we have the chance to win many titles and this is my ambition.I don't think about anything other than winning these trophies.That's why I get up every morning and work so hard.”

Braithwaite has taken in 19 outings this season, finding the target on five occasions, and has helped Koeman’s side to rediscover a spark of late.