Besides Messi and Ronaldo, everyone deals with it - USMNT ace Sargent opens up on goal droughts 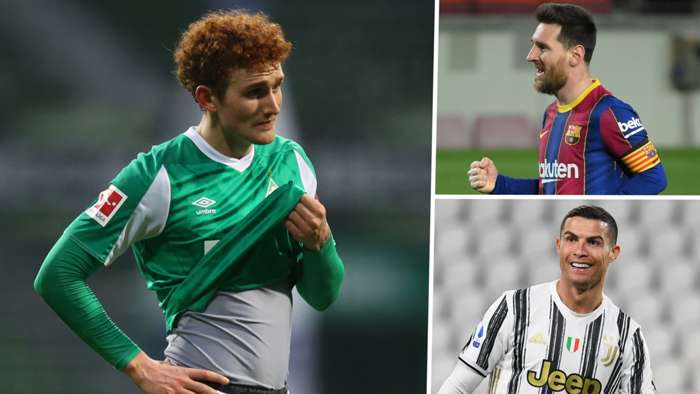 Striker is arguably footballs most rewarding position, and its most demanding.

Because the roleis so clearly defined, it isruthlesslymeasured.When all is said and done, your entire worth is based on one thing:goals.

When the ball is hitting the back of the net, there is no more beloved player on the team. But if and whenthegoals dry up, a strikers worth all but evaporates.

Josh Sargent has seen both sides of that coin several times over. Hes experiencedthe hot streaks and the cold ones, the misses and the makes.

However,as he returns to U.S. mens national team camp, Sargent happens to find himself in a fantastic run ofform as he looks to claim theUSMNTs No.9 jersey.

Before heading to Austria to join up with the rest of the squad ahead of friendlies with Jamaica, inWiener Neustadt, and Northern Ireland, in Belfast, Sargent scored three goalsin five games for Werder Bremen, marking the best Bundesliga runof his young career.

It was perfectly timed.Before his purple patch, Sargent had nettedjusteight times in 58 Bundesliga appearances.

However,by rediscovering his scoring touch, Sargent becamethe fastest American to reach double figuresin the Bundesliga, beating out Bobby Woods record of 62 matches by two games, and the second-youngest American to reach that mark in Germanys top flight, behind only Christian Pulisic.

That makes his recent streak all the sweeter as he looks to finally become the goalscorer that Werder Bremen and the USMNT believe he can be.

"I think the biggest difference is that everything just comes very naturally," Sargent says of his good run. "It just seems to happen with ease. You dont have to try so hard.

"When youre in that slump, when youre not scoring goals, it feels like no matter what you do, its just impossible to score. Id say the biggest difference is everything just seems very easy."

"If you ask any player, besides [Lionel]Messi or [Cristiano]Ronaldo, everybody deals with it," he added."Itslife as a footballer. You havetimes youre doing really well and times youre not doing so well.

"Its definitely hard at times, of course, but I think its important to have a good group around you to help you stay focused, and if you keep working hard, I think things will work out for the better."

Sargents goals have come at a great time for the USMNT, who continue to hold a very open competition at striker.The 21-year-old Sargent remains the frontrunner for the spot, although the list of candidates grows by the day.

Jozy Altidore and Gyasi Zardes will remain in the mix, despite not being in this camp, while Daryl Dikes recent run at Barnsley has seen him shoot up the rankings. You can even add in newer faces like Nicholas Gioacchini, Sebastian Soto, Jesus Ferreira, Jordan Siebatcheu and Matthew Hoppe, all players that are still looking to make a push for their own USMNT spots.

"I wouldnt necessarily say that Im the No.1," Sargent says. "We have a very deep pool. And Ivesaid it alot of times and its very repetitive, but I really do believe if you know you work very hard, good things will happen, so Ill continue to do that and not really worry about what so many people are saying on the outside and I think everything will work out well."

For head coach Gregg Berhalters 4-3-3 system to thrive, hell need a No.9 who can finish. Berhalters tactics require a lot of heavy lifting from wide players and plenty of creativity from the two No.8s, leaving the No.9 with one goal in mind: finding the back of the net.

Thus far, Sargent has scored five times in 12 USMNT matches, including a brace against Cuba in November 2019. But Berhalter still expects more from the 21-year-old as he looks to take the next step as a goalscorer.

"We want goals from him. Its really simple: our forward needs to score goals," Berhalter says of Sargent, who is expected to start against Jamaica on Thursday.

"When you look at our forwards, since weve taken over theyve scored,and thats something that were going to expect from Josh. More specifically, his movement in the penalty box, hes really good at hold-up play,really good linking other players up so thats going to be important.

"We really want him to have the mindset toput the ball in the back of the net. I challenged him in the Cayman Islands against Cuba to score goals and have that mindset and he scored a couple of goals.

"I think that was the last time he was with the team, and hopefully, against a difficult Jamaica opponent, hell have the same mindset."

The good news for Sargent is that he may have two chances to show that mindset during the ongoing international break, as he was recently cleared to travel to Northern Ireland for the second friendly of this two-game slate.

Sargent, along with Gio Reyna and Chris Richards, were previously expected to return to Germany due to quarantine protocols, but will now continue on through the rest of the window.

That will give him another opportunity to make his claim for that top spot as the U.S. marches into a busy summer with Gold Cup, Nations League and, potentially the Olympics before World Cup qualifiers begin.

And, with a little bit of luck, maybe this recent hot streak will turn into something more for a player that will be vital to the USMNT should everything go to plan.