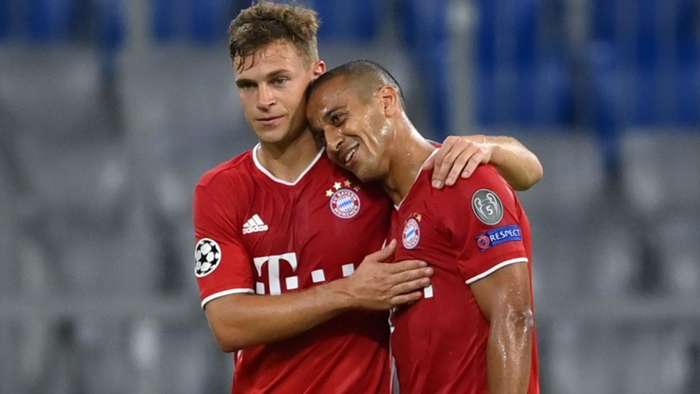 Bayern Munich coach Hansi Flick has revealed that the Bundesliga champions have bid an “emotional” farewell to Liverpool-bound Thiago Alcantara.

Jurgen Klopp has been plotting a raid on the Allianz Arena ranks for some time, with Thiago identified as a top target long before he helped Bayern to wrap up a remarkable treble in 2019-20 with a Champions League triumph.

Getting an agreement over the line has not been easy, with German giants doing all they can to convince a star turn to stay put. Thiago has, however, entered the final 12 months of his current contract and a big decision on his future had to be made.

A parting of ways is now being pushed through after seven productive years in Bavaria for the Spain international midfielder.

Flick, along with the rest of his star-studded squad, have been left saddened by a call which means the playmaker is set to leave their side and take on a new challenge with the Premier League title holders.

The Bayern boss has told reporters of a player that he holds in the highest regard: “Thiago is an exceptional player who spent seven hugely successful years here.

“He's a wonderful person and an outstanding professional. It was very emotional today when he said goodbye to us all. My coaching team and I enjoyed working with him. I can only congratulate Liverpool as they got a great player and especially a great person.”

While Thiago is now destined to head through the exits, Bayern are still hoping that David Alaba can be convinced to stay put. He is another to have entered the final year of his current terms, with no extension put in place as yet.

Former Bayern president Uli Hoeness has accused the Austrian’s agent of being a “greedy piranha”, with Alaba forced to deny that he is making excessive demands.

Untimely comments have irked those at the Allianz Arena, as they seek to avoid putting unnecessary barriers to discussions in place, with bridges now having to be rebuilt.