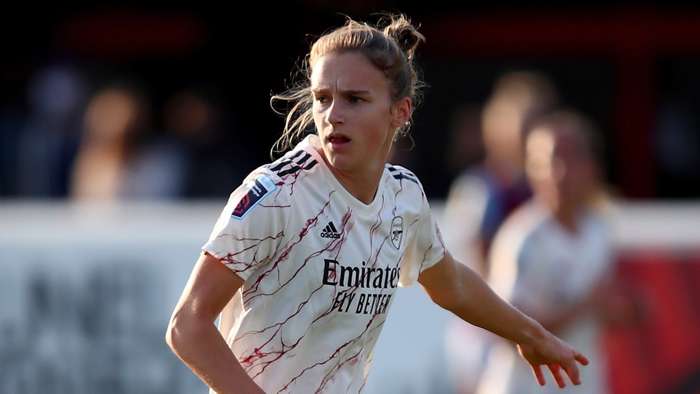 The 24-year-old’s achievement is made all the more impressive by the fact that she has averaged a goal per game.

Miedema’s latest strike put Arsenal 2-0 up against Tottenham,after Katie McCabe had broken the deadlock with a stunning free kick in just the fourth minute of the first north London derby of the season.

It was her eighth goal of the WSL season, in just her fifth game, continuing some fine form.

The Dutch international, who was crowned a European champion with her country back in 2017 and reached the Women’s World Cup final last summer, started the campaign with a brace against Reading on the opening weekend, as part of a 6-1 Arsenal win.

She then netted twice more the following week, as the Gunners demolished 10-player West Ham United in a 9-1 victory.

Miedema added another goal in a 3-1 win over Bristol City and bagged her third brace of the season last weekend in a 5-0 win against Brighton.

Since arriving in England back in 2017, Miedema has helped Arsenal win the WSL title and the Continental Cup, finishing as top scorer at the end of both the 2018-19 and 2019-20 campaigns. During that time, she has also racked up an impressive number of assists, with 21 in her 50 appearances in the league.

Last year, the Gunners finished third in the standings after the season was suspended due to the Covid-19 pandemic and decided on points per game.