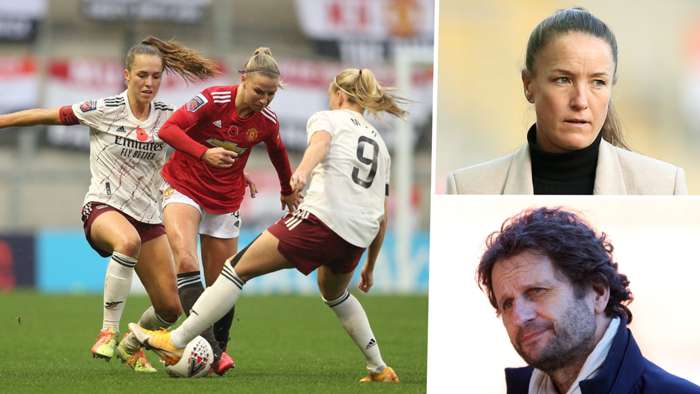 ‘Season-defining’ is a term thrown around a lot, but it’s the perfect way to label Friday night’s Women’s Super League clash between Arsenal and Manchester United.

It certainly applies to the Gunners more than it does their visitors, who are currently in the driving seat when it comes to Women’s Champions League football.

But should Arsenal claim their first win over one of the top three this season on Friday, it blows the race for that final European spot wide open.

“It is one of our ‘cup finals’, if you want to put it in inverted commas,” Arsenal manager Joe Montemurro said this week. “It’s a big game for us.”

Three points would move the north London side to within three of United, with a game in hand to come. That game, while certainly not a foregone conclusion, comes against the league’s bottom side, West Ham.

That United find themselves in this position will be particularly disappointing, despite a number of injuries throughout the season. At Christmas, after all, Casey Stoney’s side were top of the WSL. Two defeats in five days, to Reading and then local rivals Manchester City, in February, changed things dramatically.

“Reading, lets be honest, played out of their skin that day. They came with a game plan, they executed it. But thats the game really where we let ourselves down. We still had enough in the squad to win that game and we didnt.

“Having said that, theres still six games to go and I think theres going to be points taken off from different teams throughout that period. Its a funny old season.

“All we can focus on now is what we can do in front of us. I cant look back now. I cant change anything. All I can do is put all my energy into making sure that we get the results moving forward.”

At the start of the season, the prediction of United making the top three was much less common than Arsenal doing so. After all, the Gunners are the most successful team in the history of women’s football in England, while the Red Devils’ side was only formed in the summer of 2018.

But Stoney didn’t shy away from any responsibility or pressure of making the European spots this week. Asked if missing out on the top three would be a failure, she said: “Yes. For me personally, not for my players.

“I would never say my players fail because they give 100 per centeffort all the time. But for me as a head coach, I would see that as a failure.”

The impact of Arsenal not being in Europe for a second successive season might be more damning though. Historically, that is where this club, who won the WSL title only two years ago, should be.

Players like Vivianne Miedema, who ranked at No.2 in Goal 50 last year, and Leah Williamson have been linked with some of Europe’s biggest clubs in recent months. It has raised questions over whether some players would leave if Arsenal couldn’t offer European football – though Montemurro has not expressed such concerns.

The Australian coach was upbeat on Thursday afternoon as he previewed the game, relishing the chance to approach a fixture against one of the WSL’s top three with perhaps as fit a squad as he’s had since the opening weekend.

Missing personnel has been a common theme for both clubs this season. When United took on Chelsea at the beginning of the season, they had just four outfield players on the bench. For the reverse, they were missing Tobin Heath, their World Cup-winning winger.

Arsenal, meanwhile, have had large handfuls of absentees for their big games, seriously restricting Montemurro’s options when it has come to his game plan.

“You build a team at the start of the year and you recruit for a) the way you want to play and b) to be competitive at the top level,” he said.

"These games are about moments, theyre about little phases that you need to control and need to make sure that youre in control of. Having the options to do that makes it all the more better and easier for you.”