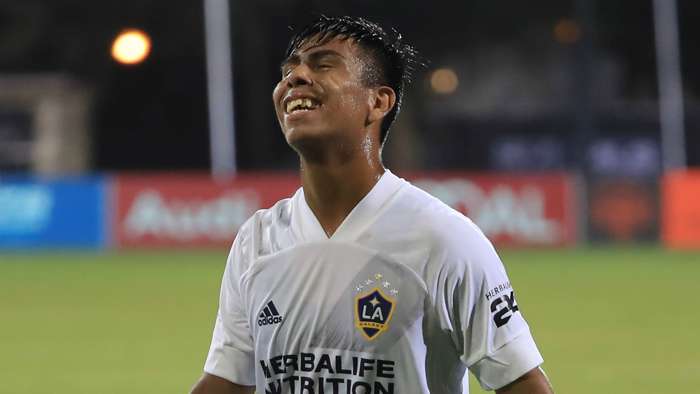 LA Galaxy rising star Efrain Alvarez has received a senior call from Mexico for two friendlies later this month amid a battle for hisnational team allegiance.

The midfielder, whospenttime training in USMNT camp in 2020, has been courted intensely by the North American rivals to set up a choice that could feel like "hell on and off the field".

Alvarez, 18, might raise speculation about his long-term thinking byplayingfor El Tri in exhibitions against Costa Rica and Wales, but the USMNT still remains in the picture for him.

International friendlies such as the ones later this month do not tie a player to a particular country, meaning Alvarez wouldnot technically become a permanent Mexico national team senior member by suiting up for El Tri against Costa Rica or Wales later this month.

Whether or not doing so wouldhint athis emotions is a different question, but he is reportedly still very much weighing his options, according to SBI.

Alvarez was born and raised in Los Angeles, but his parents are from Mexico and he has most recently represented El Tri at the youth level.

Moving to the USMNT on a permanent basis would require a one-time, binding switch permitted under FIFA regulations.

Players canchange allegiances before the age of 21 if they have played fewerthan three competitive matches at the senior level.

Games in the Gold Cup, Nations League or World Cup qualifiers would count toward Alvarezstally, but exhibitions are not taken into account.