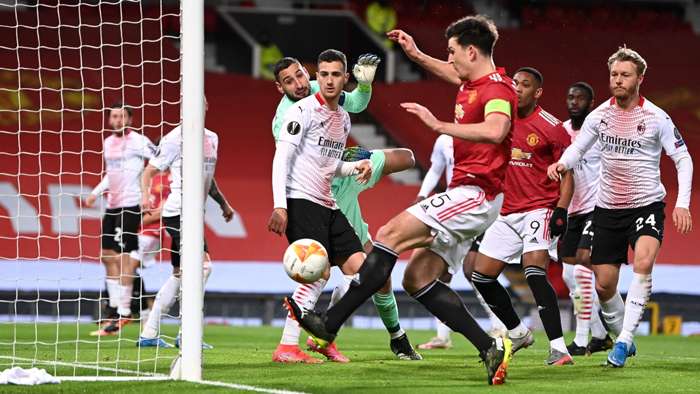 A place in the Europa League quarter-finals is up for grabs when Manchester United travel to San Siro to take on AC Milan on Thursday.

The tie is finely balanced after the first leg ended up in a 1-1 draw at Old Trafford, with the Rossoneri grabbing an injury-time equaliser.

However, having won just one of their last seven matches on home turf, they are 12/5 (3.40) outsiders with bet365 to finish the job by coming out on top here.

Ole Gunnar Solskjaer’s men have lost just one of their last 19 fixtures in all competitions and are 23/20 (2.15) favourites to progress with a win on the night.

Eight of the guests’ last 13 matches have resulted in draws, and there are odds of 12/5 (3.40) available on them playing out another stalemate in this one.

Hakan Calhanoglu, Theo Hernandez and Ante Rebic are all back after missing the first leg, while Alessio Romagnoli, Ismael Bennacer and Zlatan Ibrahimovic could also be in contention but Mario Mandzukic is still sidelined.

Paul Pogba, Donny van de Beek, Edinson Cavani, and Anthony Martial should be fit to play and David de Gea is back from compassionate leave, although Phil Jones and Juan Mata remain injured.

It looked as if United would be taking a slender lead to Italy thanks to Amad Diallos strike, but Simon Kjaer’s injury time header means the Red Devils travel to San Siro needing to score - something they have not found particularly easy of late.

In fact, they have found the net just four times in their last six matches in all competitions, although can at least rely on a backline that has kept nine clean sheets in 13 fixtures and conceded only once in the most recent six.

On target just twice in their last four home games but having conceded just five times in six games themselves, Stefano Pioli’s side is likely to keep things tight in an attempt to protect the away-goal advantage.

All in all, odds of 10/11 (1.91) offer solid value on under 2.5 goals being scored for Milan’s sixth game in seven and a seventh in a row for Manchester United.