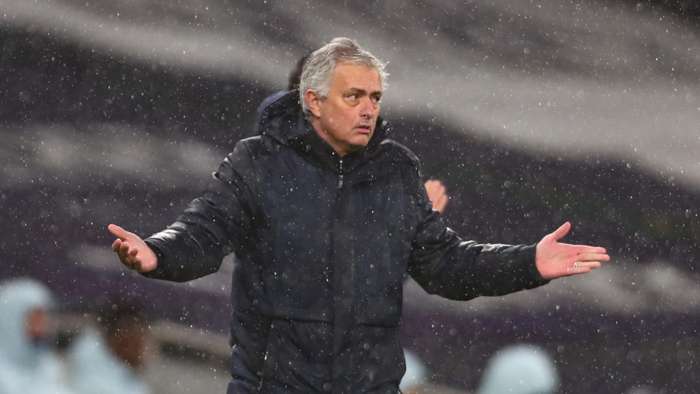 Jose Mourinho said Tottenham's performance reminded him of "the mouse and the cat" after Spurs fell short in a back-and-forth FA Cup clash with Everton.

Tottenham ended up on the wrong side of a thrilling 5-4 fifth-round clash, with Everton needing a goal from Bernard in extra time to move past Mourinho's side.

Wednesday's match was the highest-scoring game of Mourinho's Spurs tenure as well as thehighest-scoring FA Cup game between two top-flight teams since February 1961 when Sheffield Wednesday won 7-2 against Manchester United.

"I enjoyed it - and I didn't enjoy it. I enjoyed the way we played with the ball," he told BT Sport.

"We created, we had great movement, we scored goals, created chances. Showed great character to fight against incredible mistakes. But attacking football only wins matches when you don't make more mistakes than you create. We scored four goals and it was not enough.

"We fought back again but had more mistakes. It was the mouse and the cat. The mouse was our mistakes and the cat was us trying to compensate for that."

Tottenham exit the FA Cup in the fifth round, ending the club's hopes of pushing on to end their ongoing trophy drought.

The team's best chance to do so will almost certainly come in the Carabao Cup final, where Mourinho and co. will face Manchester City on April 25.

As things stand, Spurs sit eighth in the Premier League, four points off the top four and 14 points back from league leaders City.

In addition, Spurs also remain in the Europa League as the knockout stages near kickoff.

Spurs are set to travel to the Etihad this weekend to take on Manchester City, who made short work of Swansea in their own FA Cup match.

After that, Tottenham will then take on Wolfsberger in Austria to kickstart their first tie of the Europa League knockouts.