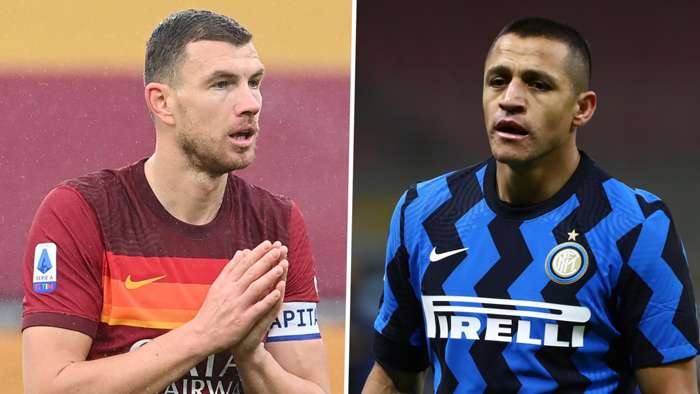 Just three days before the close of the January transfer window, it emerged that Inter and Roma were entertaining the idea of a swap deal involving Alexis Sanchez and Edin Dzeko.

That wasn't the case, though, as both Inter sporting director Beppe Marotta and Roma general manager Tiago Pinto subsequently revealed.

“Agents have been a little too audacious in pushing forward negotiations without speaking to the owners," Moratta told DAZN. "The negotiations effectively ended before they began."

One can easily understand why those "agents" were so eager to see a deal done; a transfer would have suited both players.

Dzeko was particularly keen to quit the Stadio Olimpico, having fallen out with coach Paulo Fonseca after last month's Coppa Italia clash with Spezia.

Roma had been surprisingly beaten 4-2 in a last-16 clash featuring two red cards, but that was only the start of the drama.

It was noted immediately afterwards that the Giallorossi had brought on six substitutes during the game, having mistakenly believed that they were entitled to make one more change than the usual five.

As a result, Spezia were awarded a 3-0 win and Roma team manager Gianluca Gombar was promptly sacked.

Dzeko was among those upset by Gombar's dismissal and he, along with several other team-mates, confronted Fonseca over the decision.

According to the Corriere dello Sport, a number of players, including the Bosnian, refused to train the following day in protest at Gombar's removal.

Dzeko was then omitted from the squad to face Spezia in Serie A that weekend – officially because of injury, only to be then left out of the travelling party for last Sunday's trip to Verona.

By that stage, it was clear that Dzeko was being disciplined and rumours of a transfer quickly intensified.

However, as Goal revealed, Manchester City turned down the chance to re-sign a player who spent five years at the Etihad Stadium between 2011 and 2016.

With Juventus openly looking to strengthen their attack, and Andrea Pirlo having pushed to sign Dzeko last summer, a move to Turin appeared far more feasible.

However, Goal learned that the Bianconeri were no longer interested, not least because of Alvaro Morata's fine form and Dejan Kulusevski's emergence as a viable option up front.

Juve, though, had also since turned their attention to bringing in a younger striker and were, thus, reluctant to take on a 34-year-old earning a net salary of €7.5 million (£6.6m/$9m)at the Stadio Olimpico.

Dzeko's wages were also an issue for Inter. Of course, by sending Alexis in the other direction, they would have been removing the Chilean's €7m-a-season (£6.1m/$8.4m) contract from their accounts.

However, while that €500,000 increase might not seem significant, it was for Inter, who are simply not in a position to increase their expenses right now.

Antonio Conte was clearly desperate to sign Dzeko, whom he first tried to bring to San Siro in 2019, though he remained coy on the mooted swap deal with Sanchez when it came up ahead of Inter's clash with Benevento last weekend.

"I'm not asking to sign Dzeko, it's up to the club," he told reporters. "Sanchez is our player, I want him focused on the next match."

As usual, though, it didn't take long for Conte to make his displeasure with his employers known.

After Tuesday's Coppa Italia semi-final first-leg loss to Juventus, the Inter bosscomplained about Inter's inability to bring in any new players during the January transfer window because of Suning Holding Group's attempts to sell the club.

"It’s a strange situation, there's no point denying it," replied the coach. "We started out with a project and that project basically froze in August."

So, where does all this leave Dzeko and Sanchez? On the bench, probably.

After peace talks between Dzeko, Fonseca and Pinto at Roma, a truce has been brokered that will see the No.9 return to the squad for this weekend’s game against Juventus.

Dzeko is highly unlikely to start, though, with Borja Mayoral having done well leading the line in absence, scoring three times in two games.

In addition, he has been stripped of the captaincy. Bryan Cristante will wear the armband on Saturday but it is expected that Lorenzo Pellegrini, who is suspended for the trip to Turin, will be officially confirmed as the new skipper next week.

Dzeko, of course, is too good for Fonseca to ignore completely. He will need the forward’s goals if Roma are to maintain their surprise push for a top-four finish.

In fact, Fonseca’s job could well depend on Dzeko, given the Portuguese’s position was called into question following the Spezia debacle.

Even if their accord does pave the way for a return to the Champions League, it’s probably that one of them will still leave at the end of the season.

This is not a long-term solution. As Fabio Licari wrote in the Gazzetta dello Sport earlier this week, “Dzeko and Fonseca are like a couple that stayed together for the kids, but sleep in separate beds at night.”

Sanchez and Conte, meanwhile, are hardly any happier with one another. The former Manchester United striker drew another blank in Tuesday’s Coppa loss to Juve, meaning he remains without a goal in all competitions since November 28, and has just two in total since his permanent move to Milan was confirmed last summer.

Conte could barely contain his frustration with Sanchez when speaking to the press afterwards: "I don't know if he was tired. Of course, he tried to do his best in the game, but he has to be more clinical when it comes to scoring goals.Numbers for judging the strikers are merciless, and his numbers must be better."

He may not get many more chances to improve his strike-rate, though. He was only playing because Romelu Lukaku was suspended and given Inter are already out of Europe, Sanchez is set to spenda significant chunk of the remainder of the season on the bench.

Dzeko may well farebetter but it’s hard to escape the feeling that both he and Sanchez will be playing elsewhere next season.