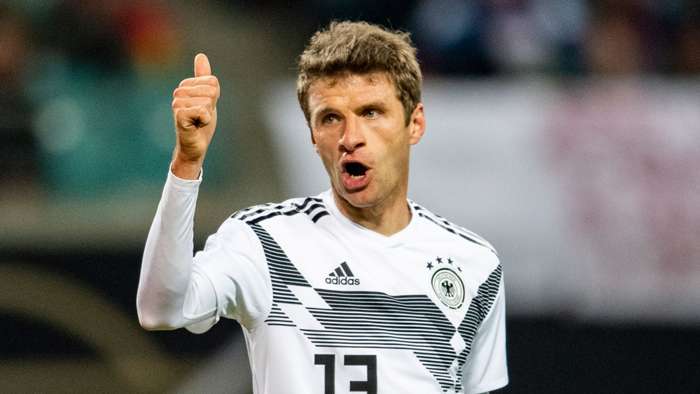 Bastian Schweinsteiger has led calls to reinstate Bayern Munich “leaders” Thomas Muller and Jerome Boateng to the Germany national team in the wake of the 6-0 thumping at the hands of Spain, with Joachim Low's decision to drop the pair coming under heavy scrutiny.

Things have not gone exactly to plan, however, with Germany's most recent loss marking their worst defeat since 1931, while Muller and Boateng continue to win silverware at the highest level with their club side.

With all the facts in consideration, Schweinsteiger cannot understand his old national team coach'sdecision to leave two fellow World Cup winners out of the squad.

“The national coach and his team have one opinion but unfortunately I personally have a different one,” the former midfielder explained to ARD.

“Players like Jerome Boateng and Thomas Muller won the treble with the best team in Europe. They play regularly in the first team and are quality German players. Why aren't they in the national team?

“In games like this especially, it's important to have players on the pitch that are a cut above, who have experience, who have quality. You could see that we don't have the required quality yet.”

Ex-Germany head coach Jurgen Klinsmann echoed his countryman's sentiments, raising questions as to who among the squad can “step it up”, with the European Championship on the horizon.

“Nobody can say why this decision was made besides Joachim Low and his coaching staff,” Klinsmann told ESPN. “We're out of the period now of experimenting with a new back line.

“Jonathan Tah came in, Rudiger was on site, but nobody could really step it up in that timeframe since the other players left the team.

“The biggest question still is about leadership – who is the real leader of that team? Obviously Manuel Neuer is a very quiet, very strong personality and still an outstanding goalkeeper, but nobody on the field besides Neuer has stepped it up in the last two years.

“The team lacks a leader, it's sad to see. It lacks a personality that after the second or third goal sends out some signals, does something, does a foul, interrupts the game, gets in the face of the Spanish players, and that raises the big question about Thomas Muller.

“Muller is a leader. He's the leader of the pack at Bayern Munich still because he keeps the young players in line. Leroy Sane, Serge Gnabry... they all follow Thomas Muller on the field and that's why Bayern is unbeaten in I don't know how long in the Champions League.

“It's a big problem for Germany when we're just six or seven months out from the Euros.”

While many are calling for Low to be sacked, however, Klinsmann believes such action would only worsen the situation.

“There's no need for a new coach because then you panic completely,” he added.

“What message do you send out there? You'd then need to establish a new hierarchy within the team within half a year, which would be very difficult. I don't see a reason to panic and look for a new coach.