'We've got our Arsenal back!' - Emery's false dawn at Fulham serves as a warning for Arteta 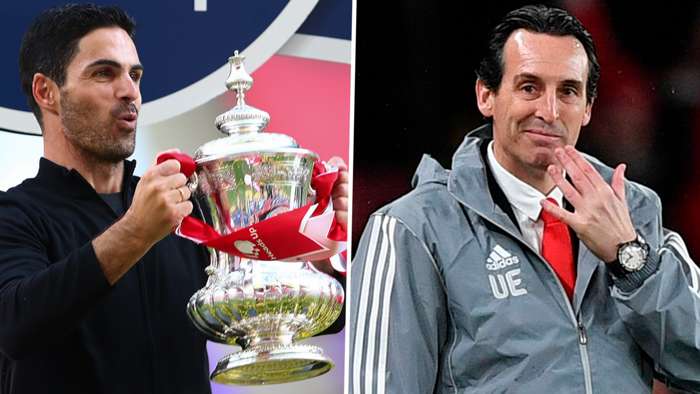 “We’ve got our Arsenal back!”

That was the chant that repeatedly rang out from the away end the last time the Gunners made the short trip to face Fulham in the Premier League.

Unai Emery was cheered off the pitch on that sunny afternoon in west London on October 7, 2018, after watching his side crush the Cottagers 5-1 thanks to a scintillating second-half display which included Aaron Ramsey’s wonderfully constructed goal of the season.

The crowd's optimism was understandable. They had just witnessed Arsenal’s ninth in a row in all competitions. Emery’s new approach had breathed new life into a club that had lost their way under Arsene Wenger, and had fallen out of the Champions League as a consequence.

For a few moments, as players and fans celebrated together after the final whistle, the division that had come to symbolise Arsenal during the latter years of Wenger’s tenure disappeared. There was unity again, a sense that a corner had been turned.

There were no banners, no protests andno planes anywhere to be seen. “We’ve got our Arsenal back” was the chant. And for a time it felt like that might be the case.

But that victory at Craven Cottage proved a false dawn. The positive signs that emerged under Emery, which continued until the festive period, were soon washed away by a wave of negativity.

A dreadful end to the season, which culminated in the Spaniard's side throwing away a spot in the top four and being thumped by Chelsea in the Europa League final, was followed by an equally poor start to the following campaign.

Emery was gone by Christmas; sacked, just over a year after he had been lauded as a saviour.

And as Arsenal prepare to return to Fulham for the first time since that day, what happened to the Spaniard should serve as a stark reminder to Mikel Arteta about just how quickly things can change in football.

Arteta’s stock couldn’t be higher right now. He picked up the pieces left by Emery in December and ended the season by lifting the FA Cup at Wembley– all done amid the backdrop of the coronavirus pandemic.

It was a remarkable achievement, one that has now seen his position upgraded.

"Mikel'sbeen here since the end of December and the last nine months have probably been the most challenging nine months in Arsenal'shistory – and we've been around for 134 years,” chief executive Vinai Venkatesham said on Thursday.

"He has lifted the spirits and lifted the energy here at London Colney and with Arsenal fans all across the world. He is doing an absolutely phenomenal job.

"The other thing that's clear is that right from the day he walked through the door, he was doing much more than being our head coach.

“So, we're going to be changing his job title going forward. He'll move from head coach to be the first-team manager. That's recognition of what he'sbeen doing from the day he walked in the door, but also where we see his capabilities.

What Arteta has done in a short space of time has been extraordinary. He has transformed the mood around the club, won silverware against all the odds and reunited a dressing room that was disillusioned.

But now, as he begins his first full season in charge at Emirates Stadium, the 38-year-old must avoid the same pitfalls that led to the demise of his predecessor.

The FA Cup success can’t be a flash in the pan. That victory must be built upon if Arsenal are to start to bridge the gap that has opened up between them and their rivals at the top of the Premier League – something Arteta himself freely admits.

“I think it’s premature,” he said, when asked if Arsenal were close to being back.

“It’s great that we were able to win trophies and we’ve changed quite a lot of things at the club– certainly things look brighter– but there is still a long way to go and the gap that I talked about is still there.

“We have to make sure we reduce that this season as much as possible.”

So far the transfer window has been relatively positive for Arsenal. They brought in Willian and Gabriel, two of their top targets, and secured a deal to bring Dani Ceballos back from Real Madrid for another season.

They are all players Arteta wanted and all three could be involved at Craven Cottage, but Arsenal’s manager knows he needs more before the window closes on October 6.

At least one more midfielder is viewed as a priority, with Thomas Partey and Houssem Aouar both on the club’s wish list.

Whether they can afford to sign either may rest on Arsenal’s ability to move players on in the coming weeks– something that has so far proved difficult, with the likes of Mesut Ozil, Matteo Guendouzi, Mohamed Elneny and Sokratis all still at the club.

The challenging market makes Arteta’s job even more difficult. He has a clear idea how he wants to move his side forward and progress, but he needs to be given the tools to do it.

For now, though, his focus is purely on Fulham and getting the season off to a strong start, which is vitally important when you consider Arsenal have to travel to Liverpool, Manchester City and Manchester United during their first seven league games.

Craven Cottage has been a happy hunting ground in the past, as it was less than two years ago when Emery’s side hit Fulham for five in what appeared to be another step in the right direction for a club that had lost its way.