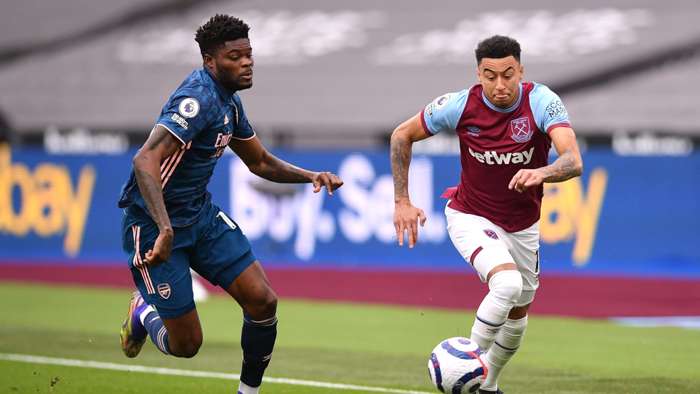 Thomas Partey admits that Arsenal looked “completely lost” early on against West Ham, with the Gunners told they need to “learn from all these mistakes” despite battling back to take a point in a thrilling derby contest at the London Stadium.

Mikel Arteta’s side gave themselves a mountain to climb against the Hammers as they fell three goals down inside 32 minutes.

A stirring fightback was staged, allowing Arsenal to claim a share of the spoils, but Partey concedes that collective improvement is required in order for those at Emirates Stadium to start hitting ultimate targets.

“I think they came out very strong. They overloaded us on the outside and they are strong with crossing.

“We allowed them too much time with the crossing and that hurt us a lot. Second half, we made sure we blocked all the crosses. From there we started to dominate.

“We stuck to our plan. We know how to hurt them, we went all-out and everybody was fighting as a team.

“I think the spirit was high after we conceded three goals. From there, we started to give our all. But we have to start as we ended, in both halves.

“Its important in the Premier League to start winning from the beginning to be in the top. You have to start good and end well.”

Arteta has admitted that his Gunners side have “two faces” after producing a Jekyll & Hyde performance in east London.

They were handed a lifeline before half-time against the Hammers, with Tomas Soucek deflecting an Alexandre Lacazette past his own goalkeeper.

A point has done little for the Gunners’ top-four ambitions, as they sit ninth in the Premier League, but qualification for continental competition in 2021-22 remains up for grabs.

They are six points adrift of the top six at present and are also through to the quarter-finals of the Europa League, where they will meet Slavia Prague.

Arteta’s side will return to action after the international break with a home date against Liverpool on April 4.