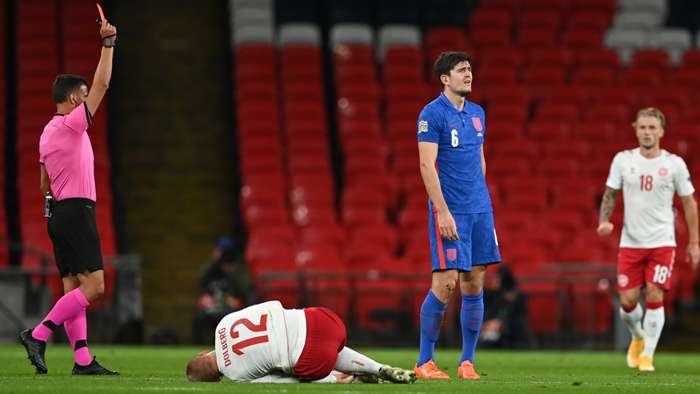 Jamie Redknapp hasjumped to the defence of Harry Maguire after the England defender's poor form continued with a first-half red card against Denmark on Wednesday.

Denmark would take the leadminutes later when ChristianEriksenconverted from the penalty spot.

The sending off continued a torrid spell for Maguire, who has seen his Manchester United side concede nine goals in three games to start the Premier League season, including a 6-1 thrashing at the hands of Tottenham.

It was a difficult summer for Maguire, who was left out of England's squad last month after he wasfound guilty of aggravated assault, resisting arrest, and repeated attempts of bribery after an incident in Mykonos, Greece in August.

Maguire, who is appealing the decision, has said he was scared for his life during the incident and refused to apologise for his actions.

On Sky Sports,Redknapp urged fans to look at the bigger picture as the Man Utd captain goes through a difficult spell both on and off the field.

"It's easy for us to sit here and rip him apart: 'He's having a nightmare, he's conceding goals,'" Redknapp said.

"He's having a moment. He's having a really bad moment in his career, he's going to have to somehow pull himself together, he's got to get back. Big weekend for him coming up for Manchester United.

"He's got to get his confidence back because he's a player really lacking confidence. Thereis a lot going on in his life and I think we sometimes forget that.

"When you go out on the football field you think everything is going to be right, but you can genuinely see he's really struggling with his game at the moment."

With his red card, Maguire became the third player to be sent off for the England men's team at Wembley after Paul Scholes versus Sweden in June 1999 and Steven Gerrard against Ukraine in September 2012.