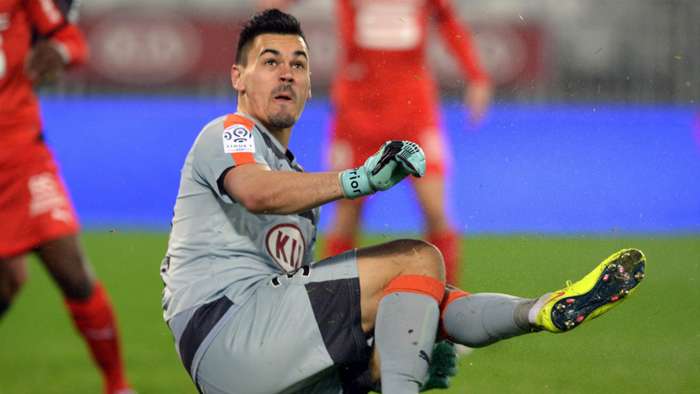 Valenciennes goalkeeper Jerome Prior claimedhe was bitten in the face during a scuffle at the end of Saturday's Ligue 2 match with Sochaux.

The 25-year-old shot-stopper left the pitch bleeding from his cheek, but his manager was unable to shed light on the incident post-match.

"Jerome has a bite on his cheek," said Valenciennes head coach Olivier Guegan after the match. "I was in the dressing room; I didn't see anything.

"It's a shame the post-match will tarnish the game, but that's not the most important thing. We put in a coherent and strong performance against a team that is unbeaten and in a really good dynamic.

"I really liked the spirit of the group."

Prior, who is currently on loan atValenciennes from Bordeaux, told French publicationSo Foot: "There are pictures. The league and justice will do their job. I have no comment to make."

When asked to address the biting accusations by the AFP Agency,Valenciennes presidentEddy Zdziech also confirmed Prior has a bite mark on his face, before stating:"This kind of behaviour is serious."

However, Sochaux bossOmar Daf suggested his players had been provoked, saying:"A player doesn't go crazy without something happening first.

"I heard insults at the end of the match. There was a lot of provocation, but you have to have more control."

Sochaux are third in the Ligue 2 standings after seven fixtures,three points behind leaders Paris FC, while Valenciennes are eighth.