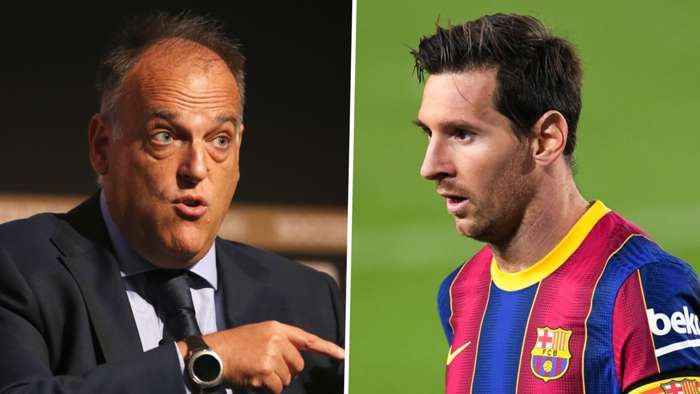 La Liga is ready for Lionel Messi to leave Barcelona, according to president Javier Tebas.

However, he once again criticised what he sees as the unfair financial practises of Manchester City, who have been the club most strongly linked with signing Messi from Barca.

"We would prefer Messi to stay in La Liga but Ronaldo and Neymar left and we have not noticed any difference," Tebas said. "We are ready."

Last year, Tebas said Messi was "essential" to La Liga as a part of the division's heritage.

"It seems the only club in the Premier League that talks about registering Messi is Manchester City, who compete outside the rules," he added."I am not the only one saying this.

"I am not too worried about them. I have criticised what they do so many times. Doing it one more time makes no difference. City is neither affected by Covid or pandemics or anything because they are financed differently and it is impossible to fight against that."

Tebas also spoke in support offormer Barca president Josep Maria Bartomeu, who recently resigned after a turbulent 2019-20 season that saw the club fail to win a trophy and Messi attempt to leave.

Bartomeu was a target of much criticism during his time at the helm and there was some celebration among the club’s fans when he stepped down in October.

Barca’s financial difficulties have become a topic of public discussion in recent months but Tebas says Bartomeu was not to blame for debts nearing €800 million (£724m/$950m).

"Barcelona are not considering insolvency proceedings," he said.

"Their debt might be slightly larger but they were perfectly solvent pre-Covid. But Covid has come along and taken away a lot of revenue. They are not so capable of repaying the debt, so their salary volume has to go down.

"That is the essential factor for most clubs. It is not because they were mismanaged earlier."

Tebas also commented on the discussions around a potential European Super League, which Bartomeu said Barca were in favour of as he stepped down. No other club has publicly signed up to the idea.

"It was a clandestine league for the 10 minutes after Bartomeu said they had joined," Tebas noted.