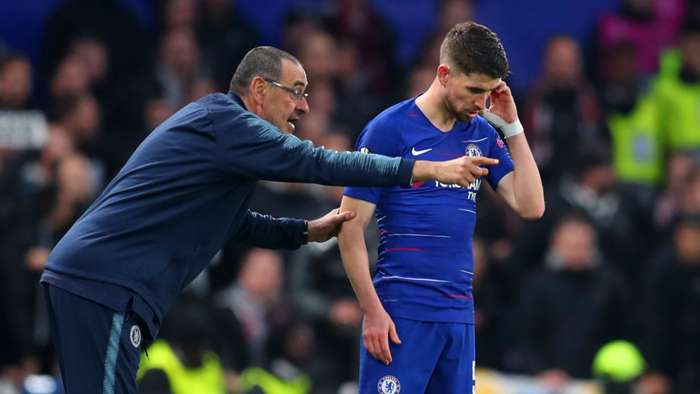 Jorginho "could follow" Maurizio Sarri to his next club, according to his agent, who says the Chelsea star is eyeing a reunion with his former manager.

The Italian duo combined perfectly to help Napoli emerge as a major force again in Serie A, and were able to pick up from where they left off in the Premier League.

Jorginho played a key role in Chelsea's run to a third-place top-flight finish and Europa League glory in his first full season in west London, but Sarri received plenty of criticism for his stubborn selection policy and rigid tactical approach.

The 61-year-old ended up leaving the club to take up the top job at Juventus in June 2019, with Blues legend Frank Lampard drafted in as his replacement.

Sarri delivered the Bianconeri's ninth successive Serie A crown last season, but was sacked after a surprise Champions League defeat to Lyon in the round of 16.

The former Napoli boss is now on the lookout for his next role, while Jorginho is currently helping Chelsea fight for major honours across all competitions after an impressive summer recruitment drive.

The 28-year-old's main legal representative, Joao Santos, saysthatalthough his client is content in his current surroundings, the midfielder is keeping a close eye on Sarri's next move with a view to potentially linking up with his old mentor again.

“He’s very happy with Frank Lampard and Chelsea can do even better than last season,” Santos told Calcio Mercato.

“Almost all the Italy players are in Serie A, as it’s an important league, but his journey took him to London. If Maurizio Sarri had remained, perhaps he’d have joined Juventus.

“Jorginho has a personal and professional bond with the coach that is very strong. We’re waiting to see where Sarri goes, and if it’s a big club in Italy, Jorginho could follow him.”

Chelsea are due back in Premier League action away at Newcastle on Saturday, with Jorginho likely to be in contention for a place in Lampard's starting XI again after starring for Italy during the latest international break.