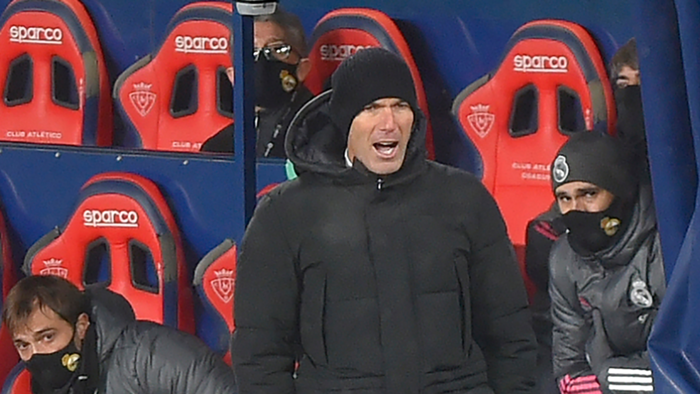 Zinedine Zidane has hit out at the decision to allow Real Madrid’s match at Osasuna to go ahead.

Madrid were forced to travel to Pamplona ahead of the game, despite their plane being stuck on the tarmac for over three hours as they awaited clearance to take off.

Pamplona was hit hard by snow on Saturday and the pitch at El Sadar was extremely tough for both sides to perform on.

It was little surprise, then, that the game ended in a goalless draw.

Following the game, Zidane cut a frustrated figure in his press conference - and was clearly unhappy about the events of recent days.

“We did what we could do on the field but it was not a football match,” Zidane said. “The conditions were very difficult.”

With Madrid also being battered by snow, the Real squad have no chance of getting home on Saturday - and will remain at their hotel in Pamplona. It could be some time before they are able to travel, much to Zidane’s chagrin.

“Everything that has happened these two days has been very complicated,” he said. “We do not know when we can return.”

Pressed further on his feelings about the game, Zidane was unequivocal in his thinking.

“Yes, clearly the match against Osasuna should have been postponed,” Zidane said. “That is clear.

“The conditions to play football were not met, which in the end is what everyone wants. As much for us as our opponents.”

Zidane was asked for comment on the Spanish FA, who pushed for as many games to take place this weekend as possible.

“I'm not going to get into these things,” he said. “We have done what they have told us, we have played and that's it.