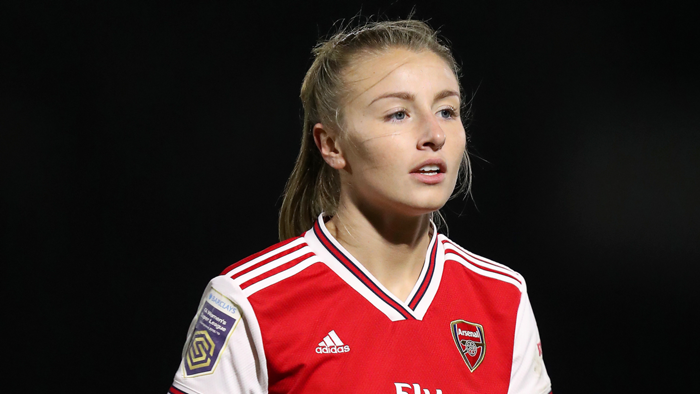 Leah Williamson is happy for Arsenal to be underestimated – but has warned rivals that they are “a team on a mission” after a disappointing season last year.

Following a summer of hype centred mainly around Chelsea and Manchester City, something head coach Joe Montemurro commented on recently, the Gunners made a statement in their opening Women’s Super League fixture, thrashing Reading 6-1.

Arsenal now head into their second game of the new season, against West Ham on Saturday, top of the table after Chelsea dropped points at Manchester United and Manchester City only won 2-0 at newly-promoted Aston Villa.

While Williamson has full belief in her team’s ability to continue to compete for titles, she also admits there can be benefits to being perceived as something of an ‘underdog’.

“Chelsea and City have both quite obviously invested and after qualifying for the Champions League, both of them are making stakes for winning it,” she said.

“It’s hard to ignore that they have done that, but I do believe that if you look at the teams and the players we have had at Arsenal over the last couple of years, we can compete with anyone. I really do believe that.

“For me, it doesn’t really change anything. We will compete and challenge as we have done in the past few years.

“There is always a slight benefit in being the underdog and I say that, not from my opinion, but how everybody sees us.

“You can sort of get on with your own business without people watching or expecting too much.

“We’re not in the Champions League so if anything, we are a team on a mission. We underachieved last season.

“I wouldn’t want to play us on our day – but I am probably biased.”

One theory as to why the Gunners have been so overlooked this summer is the signings they’ve made.

While Manchester City have brought in World Cup and Champions League winners, and Chelsea have bolstered their attacking options with Pernille Harder, Arsenal have recruited signings that shore up their defence.

“Perhaps they’re unglamorous signings, but in terms of what they add to our team, it is strong,” Williamson said. “We have a really nice balance.”

The Gunners’ five summer signings have been a goalkeeper, Lydia Williams; two full-backs, Steph Catley and Noelle Maritz; a centre-back, Lotte Wubben-Moy; and a holding midfielder who can also play at centre-back, Malin Gut.

“You saw Noelle against PSG in Arsenal'sChampions League quarter-final defeat last month and, for me, she was our player of the match,” Williamson said, running through the new faces, speaking before Wubben-Moy's return was announced.

“Steph is the type of player that somebody like me, being young and still trying to grow, I want to be surrounded by.

“Malin, there’s talent there. I have heard Kim Little talk about how good Malin will be and if real talent can recognise that, then she must be pretty good!

“Obviously, Lydia as a goalkeeper is probably one of the best characters I have ever known in football, so I can’t wait to work with her.

“In our first session she apologised for speaking too much and I said, ‘My ears are open mate, keep going’!”

The new arrivals add real depth to a team that struggled with numbers last season.

With Arsenal not being in Europe this year, having finished third in the WSL on points-per-game, they have one less competition to juggle, too.

“It’s not necessarily a benefit, because you get better playing against the best teams and those games will make the best teams,” Williamson said, discussing that lack of European football.

“But at the same time, you can really make it work in your favour because of the lack of congestion you have when you’re not in the Champions League.

“It’s tough for anyone, especially in the women’s game where we don’t have a private jet, you know. It does take its toll.