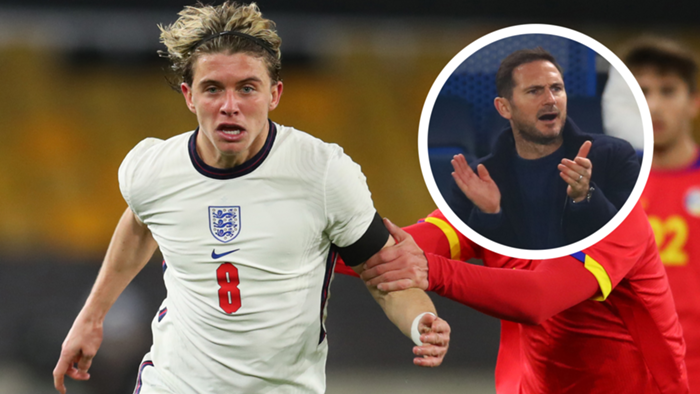 Conor Gallagher has spoken about his development as he takes an increasingly prominent role with England's Under-21 side after making the loan move from Chelsea to West Bromthis summer.

Having narrowly missed out on promotion with the South Wales club, the 20-year-old opted to move to the Baggies on a season-long loan after Frank Lampard recommended the club to the homegrown star.

Gallagher, who played in a 3-1 win for England's U21s over Andorra on Friday night, spoke about his continued development in his bid to come back to Stamford Bridge.

"I am just happy to be playing in the Premier League. I am very happy at West Brom and excited to play in more games. I have started well at West Brom even though results haven't gone our way, so I just need to keep that going and stay consistent. Hopefully, the results there will then improve."

The Blues starlet was then asked whether Lampard is keeping tabs on his development: "I believe so, as people know he is a great manager even though I am not at the club. I know the guys are watching and hoping I do well."

Friday's match wasonlyGallagher's fifth cap for the Three Lions at the U21 level but he now looks well-placed to start at the Under-21 European Championships in the summer.

Gallagher knows that performances at this level are being watched by senior manager Gareth Southgate, having seen the likes of Reece James, Jude Bellingham and Phil Fodenmake the step up in recent months.

"It gives every young English player hope," he continued. "England U21 coach AidyBoothroyd said it has been 22 players in the last four years that have gone from the 21s to the seniors which is a very high number.

"So yes, to see boys like Jude go up into the seniors is great to see and it shows we are doing a good job here and gives hope. The amount of young English talent around the country is amazing.

"We have 17-year-olds to 21-year-olds in our squad and there's a lot of competition but it is all healthy. When someone wears the shirt, they have to take their chance."