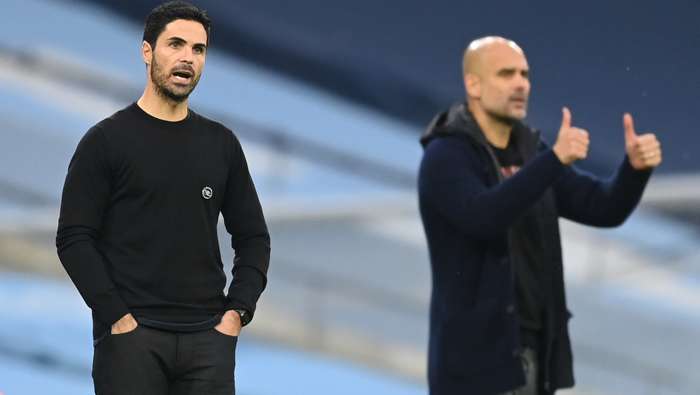 Arsenal boss Mikel Arteta was perplexed byhow VAR dealt with a penalty claim during his side's 1-0 loss at Manchester City.

When defending a corner in first-half stoppage time, Kyle Walker's boot came close to Gabriel's head and Arteta questioned why a more thorough video examination of the incident did not take place.

"That has to be checked," he told Sky Sports.

"They said that theychecked,and I said, 'How the hell have you checked if you took two seconds to check that action?'. Obviously, there is something there."

Despite ruing those missed chances, former City assistant Arteta had plenty of praise for how his team approached the match.

"I am upset because I think we deserved more from the game," he said. "I am extremely happy with the performance we put in against a top, top team, to play with the courage we did and to make it as difficult as we did, I cannot demand much more from the players.

"When you have three big chances in this game, youhave toscore. I think the three of them were really good chances and then the situation we have with Kyle Walker from the corner."

Arteta added: "We've come a long way. I'm extremely happy. I was in that dressing room for four years and I know what it takes for a team to do what we've done here."

Saturday's defeat leaves Arsenal in fifth place in the Premier League standings after five matches, the Gunners recording three wins and two defeats in their opening fixtures of the 2020-21 season.