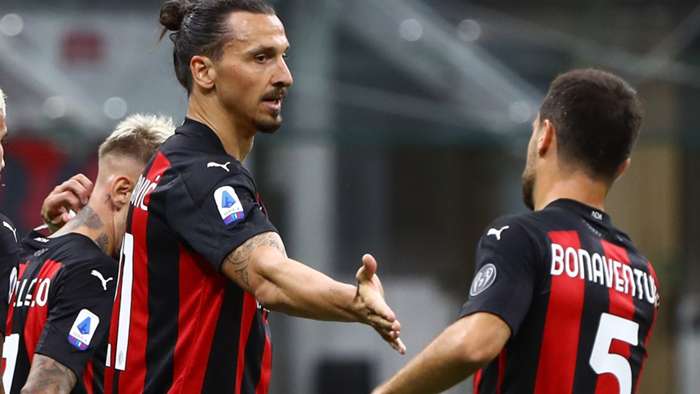 Milan head coach Stefano Pioli lauded "champion" Zlatan Ibrahimovic after the Rossoneri star made more Serie A history in the 3-0 win over Cagliari.

After having a penalty saved, Ibrahimovic netted in the 55th minute to take his tally to 10 goals in just 18 top-flight appearances since re-joining Milan from MLS outfit LA Galaxy in January.

Pioli heaped praise on the evergreen veteran striker, telling MilanTV: "Don't tell him he's the oldest to have scored 10 goals in Serie A.

"He is a champion in everything he does, he has made a very important contribution. Our improvements have gone hand in hand, individually and collectively.

"The boys will have a well-deserved rest but soon they will have to resume training at home as during the lockdown."

Milan are in negotiations with Ibrahimovic over a new contract, with the former Manchester United, Paris Saint-Germain and Barcelona star's deal set to expire.

"We have built something this season and it should be given consistency. So next season will be trying to build on what we've already done," Milan director Paolo Maldini told Sky Sport Italia pre-game.

"In all honesty, Zlatan is part of this project. It won't be an easy negotiation, but we fully intend to keep him with us. We have many young players who can grow exponentially with Ibra by their side.

"We might have different ways of achieving our objectives, but we need the same general vision of where we want to end up, otherwise I wouldn't be here."

Milan – inspired by Ibrahimovic – have been rejuvenated since the restart, with Ragnar Klavan's own goal and Samu Castillejo's effort capping a sixth-placed finish for Pioli's side.

In-form Milan (35) have scored the most goals in Europe's top-five league since Serie A resumed in June following the coronavirus-enforced break, while only Real Madrid (31) have gained more points than the Italian powerhouse (30) in those top-five leagues over the same period – a run that led to being retained as coach.

Pioli, whose team ended the campaign in the midst of a 12-game unbeaten run in the league, added: "The boys were exceptional, a fantastic return with excellent performances. Beyond the positive results, it was important to create a mentality, it must be a basis on which to build an even more satisfying future.