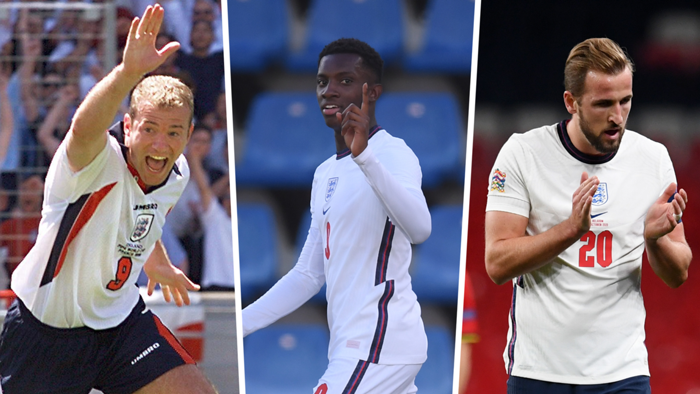 Aidy Boothroyd has challenged Arsenal's Eddie Nketiah to push his finishing to the next level as he believes the forward is comparable to England great Alan Shearer and current captain Harry Kane.

The 21-year-old forward needs just one more goal to surpass their total of 13, having already matched it with an important European Championship qualification game against Turkey to come.

Boothroyd believes the young starhas a special'aura' around him and is backing Nketiah for the top as long as he continues to get minutes for his club.

"There's no doubt about it. He’s destined for big things," Boothroyd said ahead of his side's match on Tuesday night at Wolves' Molineux Stadium. "His personality and his persona around the lads, he has an aura of responsibility and leadership about him.

"He’s a natural, all the players like and respect him. We know what he gives on the pitch but he’s good off the pitch. This is what we want our young England players to look like.

"How far can he go? He’ll have to play regular games for his club.

"He’s been getting good opportunities and he has been scoring goals and putting in good performances. I’ve worked with him for nearly three years and seen him get stronger and stronger. Hopefullywe can see him take that next step to become a regular with Arsenal and then the seniors.

"He’s got work to do and he'll the first person who will tell you that. But he can do really well. There’s always comparisons with top players over generations. You look at the career that Alan had and Harry Kane who is our England captain now.

"If Eddie can get to that point where like those two players, he’s in on goal, and you know he’s going to score consistently, that’s when you make that step from young to a senior player.

The Three Lions secured a recent win over Belgium at senior level but the sheer number of talents coming through from the youth set-up is leading to more excitement around the national team.

With Everton's Dominic Calvert-Lewin the latest to make an impact, Boothroyd described why Nketiah is such a dangerous striker and pointed to his relentless efforts to make runs that others won't.

"He scores goals; he creates goals. I counted from a previous game that he made 20 runs before he got the ball," he added. "Sometimes you get that in international football that you’ve got to have the patience.

"A lot of players get frustrated, particularly No.9s coming towards the ball, and it’s easier to defend against. With him, he’s forever diving between the lines, trying to find that inch to get him free to score.

"It takes a bit of doing but he's got that in his locker. His movement and every part of his game is getting better because of he puts the work in."