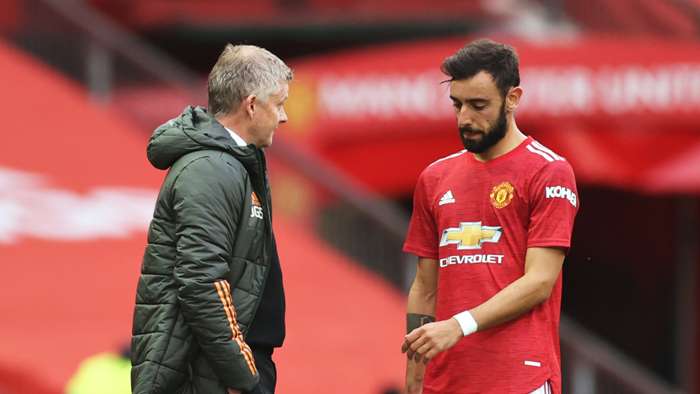 Bruno Fernandes denied reports he had an argument with Manchester United manager Ole Gunnar Solskjaer during the Premier League loss to Tottenham.

The Portugal international had opened the scoring from the penalty spot, but was said to have had a bust-up with Solskjaer at half-time.

However, Fernandes rubbished those claims after Portugal's 3-0 Nations League win over Sweden on Wednesday.

"There's been a lot of speculation about that," the midfielder told Sport TV, via A Bola.

"I believe it is a way to destabilise the group. What was said is in no way true.

"I was replaced at half-time, it is true, by technical option. The coach told me that the game was almost over and that we would have a lot of games ahead of us. Got it. I was not satisfied but said nothing that could harm the group."

After just one win from the opening three games of the Premier League season, Solskjaer has been under increasing pressure at United.

But Fernandes insisted Manchester United were ready to respond against Newcastle United on Saturday, while warning the speculation needed to stop.

"Do not use my name, my colleagues or the coach to make trouble at Manchester United," he said. "The atmosphere is good and the team is ready to give an answer in the next game."

The Red Devils are currently 16th in the Premier League with just three points from their first three games of the new season.

Fernandes has enjoyed a more successful spell with his nation over the past week and believes they did well to beat Sweden in the absence of Cristiano Ronaldo.