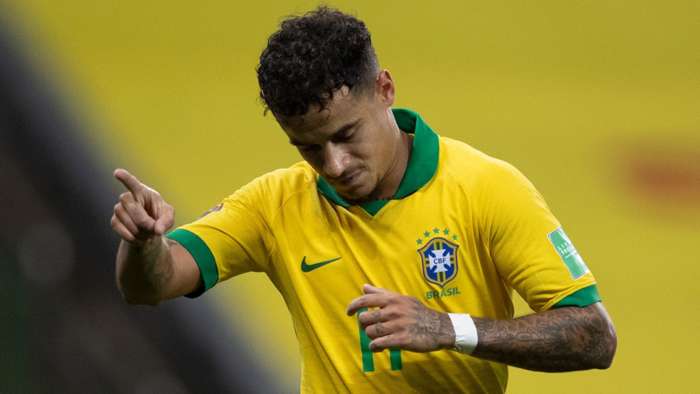 Philippe Coutinho has "magical powers", according to Roberto Firmino, who has heaped praise upon his "phenomenal" Brazil team-mate.

Marquinhos opened the scoring before Firmino hit a brace to put the Selecao in full command of the contest before the 50-minute mark.

A Jose Carrasco own goal and a Coutinho header added gloss to the final scoreline as the five-time World Cup winners flexed their attacking muscles after a long break from international action.

In addition to his goal, Coutinho was involved in most of Brazil's best attacks as he continued his bright start to the 2020-21 campaign.

The 28-year-old returned to Barcelona earlier this summer with a point to prove after being sent out on loan to Bayern Munich, and appears to be rediscoveringthe kind of form which saw him emerge as one of Europe's most exciting midfielders at Liverpool.

Firmino, who played alongside Coutinho at Anfield between 2015 and 2018, has hailed his fellow countryman in the wake ofhis latest display, telling FIFA.com: "He’s phenomenal.

"You simply can’t say that he’s not a magician. He has magical powers. He produces plays that don’t exist, that you couldn’t make up.

"I’m a huge fan of his. He’s one of the very best players in the world."

"Another unbelievable player, he was brilliant against Bolivia," Firminosaid of the 28-year-old."He was getting back to mark a lot and he did amazing things with the ball.

"There are no words to describe Neymar."

One man who was unable to feature in Brazil's latest fixture was Liverpool goalkeeper Alisson, who is currently sidelined with a serious shoulder injury.

Firmino went on to lament the absence of his Anfield colleague, who he believes has proved himself as the best shot-stopper in the business over the past few years.

"For me, he’s the number one. I’m not just saying that because he’s my team-mate," Firminoadded."The things he does on the pitch are incredible. He’s already done a great job for the Selecao.